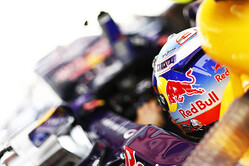 Though Nico Rosberg topped the timesheets in this morning's session, one cannot help but feel that this was a minor blip, a slight distraction, as teammate Lewis Hamilton prepares to take victory here for the first time.

While it was unlikely the German's time would be beaten, but for a mistake in the final corner of an admittedly unusually scruffy lap, Hamilton would surely have been a lot closer than the 0.869s the history books will record.

Looking supreme yesterday we can expect the Englishman to be at the front again this afternoon in the much warmer conditions.

Taking the Mercedes duo out of the equation, the battle behind is truly fascinating, even if FP3 threw a few more spanners in the works.

Though Felipe Massa was fourth fastest this morning, Williams limited running and the drop off in form since Melbourne suggests that this too was a bit of a blip, whilst Jenson Button's insistence on pouring cold water on yesterday morning's performance suggests that McLaren too has a long way to go.

Despite being some way off the Mercedes pace, Red Bull, Ferrari and, to a lesser extent, Lotus look to be next up ahead of Toro Rosso a disappointing Force India and an increasingly frustrating Sauber.

Tyre choices are hard and medium whilst the two DRS zones are on the main straight and on the shorter back straight between Turns 9 and 10.

The lights go green and the Sauber duo lead the way, Gutierrez ahead of Sutil. The Force India duo follow.

All the Ferrari teams have changed their MGU-K units since this morning apparently. An odd move, which clearly follows a directive from Maranello.

As Hulkenberg goes quickest (28.856), it's game over for Maldonado who crashes out on his out laps at T3, thereby bringing out the red flag. A disappointing end for the Venezuelan who won here in 2012.

It is a very odd incident. He loses it in T1 but manages to control it before losing it again in T3 and eventually hitting the wall on the inside.

The marshals make a real pig's ear of removing the stricken car, almost smashing it against the crane as they lift it.

The session resumes and Rosberg leads the way, Bianchi and Ericsson already on the softer rubber.

Unsurprisingly, Rosberg goes quickest in the first two sectors, finally crossing the line at 26.764. Bottas goes second with a 28.198, while Ricciardo can only manage 28.791, 2.027s off Rosberg's pace.

Problems for Grosjean, Vettel and Hamilton, all struggling to keep their cars under control.

Vettel posts 27.958 to go second but is almost instantly demoted by Hamilton who breaks the timing beam at 27.238.

A real squeal from the tyres on Raikkonen's Ferrari as Hulkenberg heads out of the option rubber.

Hamilton goes quickest in S1 as Kvyat, Gutierrez and Vergne switch to mediums. The Mercedes driver subsequently aborts his lap.

Button complains that he is struggling to get his fronts working.