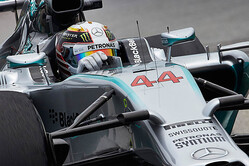 Lewis Hamilton: It's been good to have a bit of a break between races: for us as drivers and also for the team who have been working flat out for so many weeks. But after three great weekends in Malaysia, Bahrain and China I'm obviously keen to get on to the next one and continue that positive momentum into the next leg of the season. Barcelona is a great place to have the first European round on the calendar. It's a circuit we all know very well - although this is the first time in my Formula One career that I have raced there without testing at the circuit during the winter - and the Spanish crowds are really passionate about their racing. It's great to see so many people in the grandstands over the weekend. I've never won in Barcelona but I'm in a good place right now and I'm hoping that this will be the year, although it's clear who the fans' favourite will be! The circuit is fantastic, our car has performed well so far and I'm really looking forward to a good race.

Nico Rosberg: The Spanish Grand Prix is the first race of the season on European soil after four exciting races at various circuits overseas. This is where the next phase of the season begins and there is probably no other track in the world that I know as well as the Circuit de Barcelona-Catalunya. I also have some good memories of race weekends in Barcelona. Last year, for example, I started from pole position so I'm looking forward to going back there again and maybe repeating that particular feat. It's also only now that we can slowly begin to get an idea of how the different cars stack up in terms of performance. Each team will have been pushing hard during the break since the last race to find some extra performance from new parts. So it will certainly be an interesting weekend and hopefully an exciting one for the fans too.

Toto Wolff, Head of Mercedes-Benz Motorsport: We are now four races into the 2014 season and hold a strong position in both Championships. However, the first European round of the year always provides a prime opportunity for teams to arrive with improvements to their cars. Of course, we are no different to any other team in that respect and our aim must be to increase the advantage we enjoyed at the last race in China. We have seen already that our rivals are relentless in their efforts to close the gap. As a team, it is up to us to rise to that challenge: to take that relentless mentality to an even greater extent than those around us. If we are to build a sustained level of success in this sport, any small advantage must be seen as a platform upon which to build a bigger advantage. We head to Barcelona on good form and in high spirits. But, most importantly, we approach the next race weekend as we approached the first: in the knowledge that there is still a long season ahead and anything can happen.

Paddy Lowe, Executive Director (Technical): Barcelona follows the first three-week gap of the season after a near constant testing and racing itinerary since late January. For our trackside personnel in particular, it's offered some respite and a chance to recharge the batteries for what is going to be a long year with the in-season tests also now on the calendar. The break in on-track action also presents an opportunity to work on the cars and to bring more new parts to the next event than you would see during back-to-back race weekends. Aside from being the first European race of the season, Barcelona is classically seen as the first big milestone for upgrades from the teams and we can expect to see quite a range of developments throughout the pit lane. The circuit itself is highly demanding on the cars: arguably requiring the best combination of power, handling and aerodynamics seen during the entire season. It's often said that a car which performs well in Barcelona will be a great car for the season, so we're looking forward to seeing where we stand relative to the competition. There has been no sense of complacency or backing off just because our car has shown strong performance in the opening few races. The objective is to not only match, but to better the development rate of our rivals and to build on our lead in both Championships.

Lewis: The lap begins with quite a long straight that also has a DRS zone. It's really important to find the right braking point for the first corner and to carry a lot of speed through the apex without running too deep into Turn Two. Then you're straight into Turn Three which is just mega: so much g-force and taken almost flat out during qualifying. Maintaining momentum through the first three corners is crucial.

Depending on wind direction and how strong the front end is on your car, you can quite easily end up with understeer through Turn Four which may make you run quite deep into the corner. Turn Five is then quite a long corner with a bit of a dip through the apex. Good exit speed is essential here for the run down through Turn Six and into Seven. This is where the track starts to climb and continues to do so through Turn Eight, before levelling out through the high-speed Turn Nine and down the back straight.

After another DRS zone it's heavy braking into the tight left-hander at Turn 10, which is tough on the rear tyres. A quick flick left again through Turn 11 and you're straight into the right hander at Turn 12. You have to make a 'v' out of this double apex corner before heading into the complex at the end of the lap.

The final few corners are pretty tricky, as by this stage the rear tyres are quite hot. It's tough to get the car turned in through the Turn 14 and 15 chicane without having too much oversteer and the exit is absolutely crucial. You're flat out through the final turn and back into that long DRS straight to start another lap, so this is the place to overtake.

Nico: The first few races of the season are all very different but Barcelona is the first 'normal' track of the year. Although we know it very well, the demanding layout of the Circuit de Barcelona-Catalunya still makes it quite challenging. The first corner is a key section of track, since it affords a good opportunity to overtake the car in front. Following the longest straight on the circuit, which also features a DRS zone, Turn One is definitely a corner where overtaking is on the cards!

Turn Three, however, is even more exciting from a driver's perspective. It's a long, drawn-out corner that in the past has been taken almost at full throttle. We'll have to see how fast we can run through it this year because, thanks to the rule changes, we now have a lot more power but also much less downforce. Either way, this is one of the best turns of the season as far as I'm concerned and it's going to be a really thrilling experience to tackle it in these new cars.

One of the special features of this race weekend is that it is the first race of the season in Europe. This marks the return of the team trucks and motorhomes to the paddock. But there is something far more decisive about this race than that. A crucial point in the season is reached at the Spanish Grand Prix where you can begin to determine the performance of your car compared to those of the other teams at the beginning of the summer season, which is an important moment for everyone.