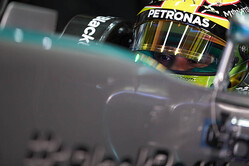 Lewis took his third wet weather pole this season after qualifying 0.595 seconds ahead of his closest challenger, Daniel Ricciardo. Nico Rosberg qualified fourth fastest but was unable to improve his lap time during his final run in Q3. Both drivers ran wet tyres in Q1, then four sets of intermediate tyres for the rest of the qualifying session. It is Lewis' 8th pole for the team and his 34th in Formula One, which is a new record for a British driver and fourth on the all-time list.

Lewis Hamilton: It was a tough session today, but I really enjoyed it. It's definitely the most satisfying feeling to come away with pole position in these wet conditions because the track is so slippery and you need to find the grip to put the lap together. The car felt great and the team have done a fantastic job this weekend. Our rivals look closer in the wet conditions, so we'll be hoping it's a dry race to take advantage of the position we're in. We go into the race with a little bit of an unknown because after I struggled in practice on Friday. We made a lot of changes to the car and I haven't yet had a chance to try them in the dry. It felt pretty good in the wet, though, so I'm hopeful that we can convert our pole position into a strong race performance tomorrow.

Nico Rosberg: I had two main problems today. I wasn't totally happy with the feeling on the brakes, which resulted in me locking up and going off on my fast lap on the second to last lap. Then on my final timed lap, I was half a second quicker going into the last corner - but my time delta on my steering wheel display said that I was two tenths slower. So I just took a big risk and spun because I mistakenly thought I had nothing to lose anyway. However, fourth place is not a disaster. I was quick on Friday doing the race preparation so I am still confident that there is everything to play for tomorrow.

Toto Wolff: Another wet qualifying session which doesn't make life easy for anyone. We looked very strong on the full wet tyres at the beginning and the field seemed to close up as we moved onto the intermediate tyres. It was an exceptional performance from Lewis; he was in a league of his own today. Nico was very competitive and right there but unfortunately he wasn't able to get a clean lap on the final run and that's what cost him in these difficult conditions. It shows how competitive it is at this time, as we had the pace to put both cars on the front row.

Paddy Lowe: Qualifying is always tricky when we're running in wet conditions, which meant that it was even more fantastic to see Lewis deliver a great lap to qualify in pole. There's a slight disappointment on Nico's side because it looked like he had the pace. However, both of his laps in the final run of Q3 were compromised and he was unable to improve his lap time. However, overall it was a positive afternoon and a good job from the drivers and the team to get through qualifying safely and in good positions. Congratulations to Lewis on becoming the most successful British driver in terms of pole positions; it's a great achievement.