ERS changes for Maldonado and Ericsson 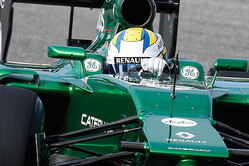 Pastor Maldonado and Marcus Ericsson have received the dubious honour of becoming the first drivers to use a secondary component of their power unit.

Overnight, Lotus, which only left the circuit at 8am on Saturday morning having worked throughout the night, replaced three of the four components which constitute Maldonado's power unit, including the kinetic and heat controls (which together make up the Energy Recovery System) and the energy store.

Caterham too opted to replace the energy store for Marcus Ericsson.

The complex new engine regulations have an equally complicated system in which each of the four major power unit components attract five place grid penalties if drivers use more than five during the season. However, under article 28.4a of the technical regulations drivers are allowed five of each component during the season, meaning neither Maldonado nor Ericsson will receive a penalty for tomorrow's grand prix.