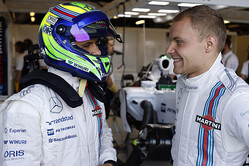 Lewis Hamilton may have stopped on track during opening practice but Mercedes remains the team to beat according to Valtteri Bottas.

The young Finn has been reluctant to play up his own team's hopes, and despite a solid day of running still refuses to be drawn on his chances. "The time Mercedes did today is very quick," he claimed. "No matter how much fuel is in the tank they are quick. In terms of where we are it's still too early to say. I think it's fair to say we're somewhere in the top ten but where… We'll see tomorrow."

Bottas' day was spent focussing on setup work ahead of Sunday's race, while Felipe Massa in the sister car ran a development rear wing. "We still need to analyse the data and see if it's something to go for," he explained. "We got through the programme, a lot of set up work today, both short and long runs in the end.

"The car ran without any problems. I think the team has done a very good job because it has been in thousands of pieces since testing, so it's nice to see it still works!"

With two seconds between the soft and medium compound tyre the choice for qualifying is clear, though it means some head scratching with regards to race strategy. "It's quite a big step," said Bottas of the difference between the compounds. "We need to look if there's something else we can do to get even more.

"The surface here is not as rough as in Bahrain, so that always gives the tyres an easier time. I don't think one stop is going to be possible, I think two or three."