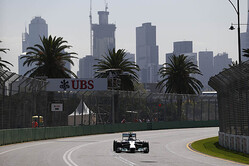 Fernando Alonso was quickest this morning, ahead of Button, Bottas, Massa, Ricciardo and Rosberg.

The big talking point however was Lewis Hamilton's failure to complete a single lap after suffering a sensor problem. Then there was the continuing saga at Lotus where neither driver posted a time. Indeed, while Grosjean never made an appearance, Maldonado came out late in the session but suffered a fire in the cockpit on his out lap. There were problems for the Caterham duo also.

Sutil is first out, followed by Ericsson, while in the Lotus garage, promisingly, Grosjean is in his car.

Caterham reveals that Kobayashi had a power unit related fuel system issue which required the engine being removed. "Taking a 2014 Power Unit off the car is a complex job, taking much longer than the old V8s," tweets the team, "hence no time to fix it to run in FP2."

As Sutil posts 1:38.055, more and more drivers take to the track, among them Hamilton and Grosjean. The Frenchman has a power steering issue and a "false neutral".

Following a moment, Ricciardo admits: "It got away from me and caught me by surprise".

A 32.013 sees Rosberg go quickest with Vettel slipping into second, the Red Bull showing a lot more promise than witnessed in Bahrain.

Another off for Vergne (T3), both Toro Rosso drivers having more than their fair share of excursions this morning, thought to be down to the brake-by-wire.

Indeed, a number of drivers are having problems keeping it on the black stuff, Vettel the latest to run wide (T1). The German is subsequently told that he had two wheels on the grass, "yes, I know" he replies.

Alonso goes second with a 32.046 however, shortly after, teammate Raikkonen (currently ninth) stops at the end of the pitlane. He is subsequently rescued by his mechanics and pushed back to the garage. Ironically, the Spaniard was stuck behind him at the time.

Ricciardo goes quickest in S1 and again in S2, finally crossing the line at 30.597. The Australian is on the softer rubber as are Rosberg and Hulkenberg.

Meanwhile, Grosjean takes to the kitty litter having gone off at the chicane. He continues.

After thirty minutes, Ericsson, Maldonado and Kobayashi have yet to post a time, the Japanese and Venezuelan both effectively out.

Bottas improves to third (30.920) having posted PBs in all three sectors. Moments later Vettel bangs in a 30.381 to go second, albeit 0.6s off Rosberg's pace.

Raikkonen is back on track, his problem, thought to be gear selection, seemingly resolved. Elsewhere, Button goes third with a 30.510 though, curiously, his only PB was in S3.

Shortly after Massa gets very, very out of shape in T1, former teammate Alonso is seen wrestling with the Ferrari. As expected, though much quieter than their predecessors, the 2014 cars are hard to handle.