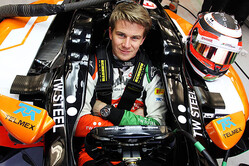 Force India will head in to the Australian Grand Prix having shed as much as 10 kilograms from its car since it packed up in Bahrain less than two weeks ago.

Such a significant figure would typically indicate a complete redesign of the chassis, but given the lack of time since the final test that seems highly unlikely. Instead it seems probable the team has removed parts and systems from the car in order to reduce its mass so considerably.

For its effort the team will receive a minor performance improvement. All teams aim to produce cars that are underweight and then use ballast to bring them up to the required minimum.

However, with a fixed weight distribution (between 45.5% and 46.5% of the cars weight must be over the front axle) the only real gain to be had is by lowering the centre of gravity, which itself produces diminishing returns.

By reducing the weight of the car Force India has likely lowered its centre of gravity, which will help handling, but also allows it the freedom to move ballast and shift the weight distribution. Though only 1% of leeway is allowed, even such a subtle change can influence the car's balance.