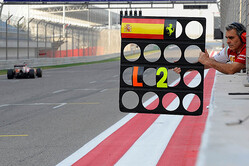 The FIA has made a last minute tweak to qualifying to encourage drivers to participate during the third part of the hour-long session.

Drivers who make it through to the final phase will now be given an extra set of tyres which must be handed back after qualifying, whether they use them or not. Should a driver set his fastest time on the 'bonus' set he will be required to start the race on the tyres with which he set his fastest time in Q2.

On the surface it's a novel idea which gives teams a free set of tyres with which to participate in the final part qualifying, eliminating the practice whereby drivers on the fringes of the top ten would sit in the garage to conserve tyres for the race. In reality however those who reach Q3 are deprived a set of tyres since those who fail to reach the final session also receive an additional set of tyres, only theirs can be used in the race. It essentially provides all drivers from P11 on the grid an artificial competitive advantage courtesy of simply having more sets of fresh rubber, a point that can't have escaped those who expect to find themselves on the fringes of the top ten.

A change has also been made to the length of the first and third qualifying phases, with Q1 being reduced to 18 minutes and Q3 extended to 12 minutes. The intent is to give teams in the final phase the opportunity to complete multiple runs, should they so choose, while maintaining the hour long format which seems to best suit television.

The announcement follows revised rules surrounding the opening practice session on Friday whereby teams are given another set of tyres which can only be used in the first thirty minutes. Dubbed the FP1/30 tyres, the regulations stipulate that they can only be used in the first half hour of running during a grand prix weekend, though it remains to be seen whether it's enough to tempt teams out of the garage for more than just the traditional installation laps.