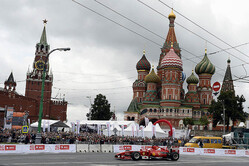 Having brought F1 to the people in so many cities, including Moscow (right), Jerusalem and Warsaw, Ferrari is doing it again, this time bringing the adrenalin rush to Soweto, a suburb of Johannesburg.

South Africa has a long F1 tradition, having staged 23 Grands Prix between 1962 and ’93. It also boasts a World Champion in the shape of Jody Scheckter who took the title in 1979 at the wheel of a Ferrari. It’s been a long time since F1 visited South Africa, thousands attending a test at Kyalami in earlt 2001 which only featured Williams and BAR, and attemping to put that right is the Maranello team and its partner Shell.

The street demo is being staged to launch the new Shell V-Power Nitro+, featuring test driver Marc Gene at the wheel of an F60. Thousands of spectators are expected to show up at the impromptu circuit which has been set up around Soweto’s Soccer City stadium, home to the 2010 World Cup Final.

The event runs over two days. On Friday, Gene will also visit the Soweto home of Nelson Mandela, now a museum, in the Orlando West district. On Saturday, the Spanish test driver will be at the Fomiss service station before taking part in a spectacular parade of road going Ferraris, organised in conjunction with Viglietti, the South African Ferrari importer. After that, he will be strapped into the F60 for the much awaited spectacle, featuring burn-outs, pitstops and bursts of breathtaking acceleration.