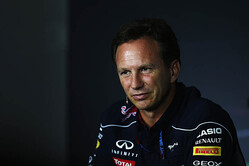 It was essentially a case of "nothing to see here" when Red Bull boss Christian Horner was asked about his team's problems at the weekend.

Attending the Zoom Auction in London on Friday evening, Horner was besieged by fans and journos keen to know whether the team's domination of the sport has fallen off the rails following a disastrous test at Jerez which saw the Milton Keynes outfit head home early.

"There's a few things we needed to tighten up on our side but nothing major and obviously Renault have some issues that they are tidying up as well," he told Sky Sports. "But these cars are so complicated that even small problems can cause big failures."

Whilst Horner supervised the sale of pictures taken by various F1 personalities, including his own snap of his donkeys, design guru Adrian Newey is burning the midnight oil in his attempt to address the various issues facing the team, mainly thought to concern the packaging of the Renault power unit.

"Obviously, there's quite a bit to do but there's still a fair bit of time before the first race," said Horner. "The Bahrain test next week is an important test and we are working very hard at both Renault and Milton Keynes.

"We don't want another test like Jerez," he admitted, "but that's what testing is for, you sort your problems out so as not to have them at the races."