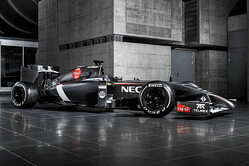 Sauber unveiled its 2014 contender online today, the Swiss outfit's website promptly cracking under the pressure... hopefully not a portent of the season that follows.

"We have put a very challenging year behind us," said Team Principal, Monisha Kaltenborn. "The first half of 2013 in particular was difficult for us, but the second half saw us making significant strides. We learnt a great deal during this time and will be applying the lessons in the new season."

"Due to the radical changes in the technical regulations, predictions are simply impossible to make at this stage," she admitted. "Even more so than in previous years, any impression of how the teams stand against each other will only emerge once winter testing has been completed. That is also when we will announce our goals for the 2014 season. One thing's for sure: reliability will be of the essence, especially at the beginning of the season."

Turning her attention to her drivers, she said: "Adrian is somebody we've been observing for some time and with whom we've been in contact since September. That is why I'm particularly delighted we've managed to get him on board. He has repeatedly demonstrated just how fast he is, and he isn't lacking in experience either, being about to enter his seventh season. In the light of the far-reaching technical changes, that is an advantage not to be underestimated."

"As for Esteban Gutierrez," she continued, "we have long considered him to be a talented racing driver. We know him extremely well as his connections with our team go back several years. Last year he had a difficult start, but managed to steadily progress. He has also settled into the team very well. We are confident he can now turn his experience into good results."

Sutil is delighted with his move to Sauber. "After six good years in the same team, it was time for me to look for a new challenge. I'm determined to have a successful future with the Sauber F1 Team and will do my bit to ensure that. In recent years the team has repeatedly demonstrated its potential, not least in the second half of the last season. And as for infrastructure, Sauber are a match for anybody. I can't wait to take on the challenge!"

"Last season I had a steep learning curve," admitted Gutierrez, "but working together with the team, I was able to make steady progress. This is my fourth year with the Swiss team, and the second as a racing driver. Last year I learnt a great deal and I feel ready for the next step. The 2014 season will be a huge challenge on the technical front, which makes it all the more important to know the people you work with well. I will do everything I can to improve further and to support the team with all the resources I have."

On January 21st, the team announced Giedo van der Garde as its test and reserve driver. "Giedo has four years of experience in GP2 and he drove one year in Formula One," said Kaltenborn. "These are good credentials to work successfully with our team. Many times Giedo has shown his talent as a race driver. At the same time the team would like to support him to further develop his skills. Giedo has the right attitude to take the next step forward."

Taking on the role of test driver is 18-year-old Sergey Sirotkin of Russia. "Last year Sergey already had a chance to glean a first-hand impression of Formula One," said Kaltenborn. "He spent several days in the factory, spoke at length with our engineers, was with the team at the Italian Grand Prix and drove 60 laps in a Ferrari in Fiorano. Our aim, as before, is to prepare him for entry into Formula One."

The changes to the regulations introduced for 2014 are arguably the most sweeping ever seen in Formula One. As far as the engine in particular is concerned, the changes require a completely new concept. In place of last season's naturally aspirated 2.4-litre V8 engine comes a 1.6-litre turbocharged V6 power unit, backed up by an energy recovery system (ERS) which is twice as powerful as in the past and with, potentially, more than ten times the deployable energy.

But that's not all; key changes have also been introduced on the aerodynamics. For example, the maximum width of the front wing is now 165 cm (previously 180 cm) and the nose will be very low. This is intended to improve safety. Lower noses have been introduced by agreement between the FIA and the teams to reduce the risk that a car will be launched into the air in the case of a nose to rear wheel accident and also to reduce the risk of a driver injury in the event of a "T bone" accident.

Modifications have also been made to the dimensions of the chassis profile at the front of the car and the side crash elements, which are now standardised. The side impact test has been replaced by push off and load tests which are more stringent than before. These structures, combined with the way they are attached to the chassis, should result in better safety in the case of an oblique side impact. In addition, the lower rear wing is now removed. The aerodynamic effects, which could previously be achieved at the rear of the car through the manipulation of exhaust gases, are now restricted, with the position of the exhaust now more precisely defined. Side exhaust exits are no longer permitted; the exhaust tailpipe will now exit centrally and rearwards, with only minor changes allowed to its angle.

All of these measures reduce downforce and, therefore, decrease cornering speed. The cars will also be slower due to the raising of the minimum weight, which increases from 642 kg (including driver) to 691 kg, cancelling out – at least in part – the weight added by the new technical systems.