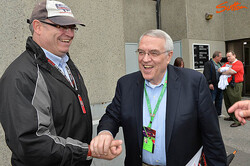 Barely seconds after the FIA had confirmed the 2014 F1 calendar, organisers of the proposed race in New Jersey - not for the first time - issued a press release.

The event having been 'postponed' for the second year running, the organisers now claim they are working on getting the race going in 2015.

The press release - for what it's worth - reads:

The Grand Prix of America at Port Imperial, a Formula One World Championship race slated for June 2014 on the streets of Weehawken and West New York, N.J., has been postponed. GP America executive chairman and promoter Leo Hindery, Jr., and his team are working on restructured financial arrangements for a 2015 race.

Hindery (pictured) acknowledged the challenge of completing the intricate financial structure for the event, which will run on a 3.2-mile temporary street circuit along the Hudson River, with the New York City skyline as the backdrop.

"Our entire management team and our supporters in New Jersey, New York and throughout the Formula One community obviously want to see the inaugural Grand Prix of America at Port Imperial take place as soon as possible," he said. "Bringing a world-class race to the world's largest media market is a huge undertaking that has required balancing construction of our road course, without tapping any public money, with the Sport's own timing demands.

"I want to thank Formula One Management, New Jersey Governor Chris Christie, Mayors Richard Turner and Felix Roque, Roseland Property Company and the other local property owners involved for their patience while we've worked to get this right so that we can finally go racing in 2015."

Bernie Ecclestone, Formula One Management president and chief executive officer, is looking forward to a first-class inaugural Grand Prix of America in 2015.

"There is great demand for a race in New Jersey and I have no doubt we'll be racing at Port Imperial in 2015," he said. "New races can take many years to get started, but there is significant momentum and we are close to realizing a New York City F1 race."

Christopher R. Pook, GP America special assistant to the chairman, noted the complexity of creating the first Formula One event in the New Jersey/New York area.

"This is a very complicated circuit and incredibly important to the overall Formula One program in North America," he said. "To get it right in New York will greatly increase awareness of Formula One and motor racing across the continent. I remain very confident about this event."

The Grand Prix of America at Port Imperial will run on a 3.2-mile temporary street circuit in Weehawken and West New York, N.J., along the Hudson River and across the top of the Palisades cliff, with the New York City skyline as the backdrop. More than 100,000 people are expected to attend the three-day event, most arriving by public transportation. The race, which will receive no government subsidies, is expected to generate more than $100 million in annual economic benefits for New Jersey and New York.