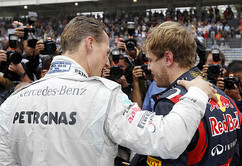 The question of course is, is it the driver or the car? If Fernando Alonso or Lewis Hamilton were driving the Red Bull, would they be as dominant as Sebastian Vettel?

This question has been asked every time a driver/car pairing has dominated for more than one season, be it Jim Clark and Lotus, Jackie Stewart and Tyrrell, Niki Lauda and Ferrari, Ayrton Senna or Alain Prost at McLaren, Schumacher and Ferrari, and now Vettel and Red Bull. Few drivers who have been multiple champions have won in different cars, Fangio excepted of course. Graham Hill won at BRM and Lotus, Lauda won at Ferrari and McLaren, Fittipaldi at Lotus and McLaren, Schumacher at Benetton and Ferrari.

Following the introduction of the FW 07 by Williams midway through the 1979 season, the car was one which was a winner regardless of who was in the cockpit, with its first win taken by Clay Regazzoni, the 1980 Championship won by Alan Jones, the 1981 Championship lost by a single point by Carlos Reutemann, and the 1982 Championship won by Keke Rosberg, and Constructors' Championships for the car in 1980 and '81.

The various developments of the McLaren MP4 enjoyed similar success, bringing a total of seven Drivers' Championships to Niki Lauda, Alain Prost, and Ayrton Senna. And six Constructors' Championships between 1984 and 1991.

Many have questioned whether Mark Webber is getting the same treatment as Vettel, and the same attention to detail on his car. The facts are, in the years they have been on the Red Bull team, Webber has won 9 races and 13 poles. Meanwhile, Vettel, after stunning everyone with his amazing pole and win in the rain at Monza in 2008 for Toro Rosso, leading to his promotion to Red Bull, where he has now won 4 Championships in a row, including 37 wins, 8 in a row, and 43 pole positions, as dominant a 4-year run as the sport has ever seen, this side of Schumacher and Ferrari.

Despite the fact that the Red Bull is never the fastest in a straight line, Adrian Newey's designs have consistently been the fastest cars on race day at virtually any type of track, be it a modern, tedious Tilke-drome, or a classic like Spa or Monza. Their recent domination may be tested in 2014, with new engines and regulations, but with Newey seemingly always a few steps ahead of other designers, Vettel's domination seems likely to continue for the foreseeable future.

From 2000 to 2004, while winning 5 consecutive Championships, Schumacher won 48 races and 40 poles in an utterly dominant Ferrari, with his teammate, be it Eddie Irvine or Rubens Barrichello, dutifully following in his wake.

Schumacher's dominance in those years was complete, helped by having the best car and Ferrari's relationship with Bridgestone. His return to Formula One with Mercedes certainly tarnished his legacy, as he was usually slower than his teammate, but seven championships speak for themselves, regardless of his often questionable 'tactics'.

Dominance is relative as well. When we look back at drivers like Fangio and Clark, they sometimes won so convincingly that they lapped the field, or all but two or three cars. Now, Vettel wins by 5 to 10 seconds, and is still considered dominant, as other drivers never get quite close enough to threaten him on most occasions.

The real mark of a top driver is seen in two particular ways. When he is competitive in an obviously inferior car, capturing a podium or three in a season when his teammate never sniffs the top 10. Or, when presented with a car with a real advantage, he seizes the season by the throat, and buries the competition, like Jenson Button in 2009 with the Brawn, or Mario Andretti in 1978 with the Lotus 79, Alan Jones at Williams in 1980, and others.

The number 2 driver on the dominating team has a difficult task, depending on how the team handles things. Ronnie Petersen was reasonably content to follow Mario in '78, knowing Mario had done the development work on the car, and Ronnie was returning to the team after leaving Lotus some years before. Rubens Barrichello stewed behind Schumacher, and though he always showed the proper attitude in public, cannot have been very happy to be Button's wingman on the Brawn team. Lewis Hamilton certainly chafed at being thought of as Alonso's 'support' at McLaren, and was not the least bit shy about showing it, on the track or in the garage. McLaren famously had no team orders when they paired Niki Lauda with Alain Prost, or later when Ayrton Senna joined the Frenchman, and the conflicts between those two are legendary. Ferrari, especially when Il Commendatore was alive, always seemed to enjoy pitting their drivers against each other, though it always seemed there was a favoured son on the team, especially if he were Italian.

In 2013, it's clear that Adrian Newey and Red Bull have the best car. Alonso or Hamilton would be just as dominant were they driving it, and perhaps a few others. I am not certain how well Vettel would do if he were driving a less efficient car, like the Mercedes or Ferrari.

My conclusion is that most of the time it is the car, particularly in these days, where any driver with the talent, drive, and dedication to get to Formula One is capable of bringing a top car home first.

There are exceptions of course. Colin Chapman said Jim Clark was not a good development driver, because he was so good he could find a way to get a car with problems home first. Being successful requires not only skill, car control, and a burning competitive fire, but confidence as well, and nothing builds confidence better than knowing you are in the best car, and nothing saps it faster than knowing you are not.

Learn more about Jim and check out his previous features, here