Austin preview with Boullier and Permane 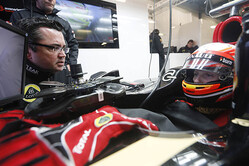 After a busy weekend in Abu Dhabi, Lotus F1 Team Principal Eric Boullier is focused on the strongest results possible from the two remaining races of 2013.

It's busy times for the team?
Eric Boullier: It's no secret that there is a lot going on at Enstone at the moment, but we're being kept busy putting everything in place to secure the team for the future. This isn't the work of a moment and it certainly doesn't move at the pace which most of us would want it to, but we keep pushing. Aside from everything behind the scenes, the main positive is that we continue to have a strong car on track and we aim to make the most of that in the remaining races of 2013.

How is the relationship with Kimi?
EB: He is completely on side. We all spoke in Abu Dhabi to make sure we know where we're going - and how we're getting there - for the final races of the year. Our focus is first on a good performance in Austin, and then the focus becomes getting a good result in Brazil.

Is it a challenge to have a different wheelbase car for each driver?
EB: It's a matter of setup and getting the car exactly as the driver wants it. Romain prefers and gets more out of the longer wheelbase, while Kimi prefers and gets more out of the shorter wheelbase. We are able to run with both configurations without issue so this is what we're doing. If either driver wants to change configuration again then of course we can do this, but it's not a quick job.

How important is it for Formula 1 to succeed in the US?
EB: It's a market where Formula 1 should be. We already have some American partners, including two brands from very strong American-based international companies in the form of Microsoft Dynamics and burn from The Coca Cola Company. It's good to be racing in their home country; it's a land of tremendous opportunity for Formula 1 and we hope to build on this opportunity in the future.

What's the aim for Austin?
EB: We missed out on a podium in Abu Dhabi, but it's clear that the car had the pace to be there. That's where we want to be as that's where you get the most points. It would obviously be fantastic if we could get both of our drivers back on the podium before the end of the season, and if they could both be there in Austin I'd be a very happy man.

Second place in the Constructors' Championship is looking to be an increasingly tall order...
EB: There are two races left and 86 points available, so mathematically it's still possible and we're not going to stop pushing in any regard. Of course, to score maximum points you need to occupy the top steps of the podium and there's a Red Bull plus Sebastian Vettel shaped problem there. Certainly for us, it would be good if Seb took an early winter holiday! Looking at the standings and how the teams have been scoring in the last few races, you would have to say that third certainly looks to be a little more within reach, but our approach is the same; to keep pushing all the way.