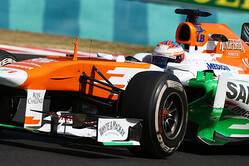 Paul Di Resta: "It's great to score points here in India - the team's home Grand Prix and a really important race for us. We took an aggressive strategy by pitting at the end of the first lap to change from softs to medium tyres - which was always the plan. After that we effectively split the race in two and I pitted again for my second set of medium tyres on lap 30. The other positive is that we've steadily improved the car over the last few weeks and I'm feeling more comfortable, so I think we can be optimistic of performing at a similar level in Abu Dhabi next week."

Adrian Sutil: "The target was to score points so eighth and ninth places are a great result for us today. My one-stop strategy was the riskier approach and it was only during the race that we decided to go ahead with it. The medium tyres, which I started on, were performing really well and I realised that doing a one-stop race was possible. We thought that the soft tyres would only last around five laps, so I made sure I really looked after them, and in the end I managed just under twenty laps. After some difficult races recently, we showed everybody what we can achieve with some great teamwork today."

Dr Vijay Mallya, Team Principal and Managing Director: "Like everybody in the team I am delighted to see both Sahara Force Indias score points in our home race. That's the goal we set ourselves ahead of the weekend and the six points scored are very important for strengthening our position in the Constructors' Championship. The second half of the season has been challenging for us, but we showed today that we never give up and that all the recent hard work has paid off. I want to congratulate the engineers for making the right calls with the strategy, the drivers for their strong performances, and the mechanics for consistently quick pit stops. With just three races remaining this season, there is plenty to play for and we will go to Abu Dhabi determined to keep up this momentum."