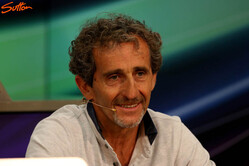 Most of the Formula One circus is nearly half way around the world in India today preparing for Sunday's Grand Prix but one of the sport's most well-known names will not be joining them. We are referring to four-time Formula One champion Alain Prost who is in Paris this evening to announce his return to racing as a team-owner in the Formula E electric championship which will launch next year.

The news was revealed today by Pitpass' business editor Christian Sylt in American motoring magazine Autoweek and there is little doubt about the credibility of the source. Over the past few days invitations were sent to guests for an event which will take place tonight and will be hosted by Prost, Formula E's chief executive Alejandro Agag and Jean Todt. Leaving little to the imagination, the invitations were entitled "Official launch of new Formula E team" and they state that the hosts "have the pleasure of inviting you to the official launch of the latest Formula E team."

It is 12 years since Prost has owned a team in a major motorsport series. In 1997, four year after retiring as an F1 driver, he bought the Ligier F1 team and became its team principal. The outfit was re-branded as Prost Grand Prix and its best result was finishing in sixth place in its debut year.

Prost GP closed its doors in 2001 after the breakdown of talks about selling it to Khaled bin Alwaleed, son of Prince Alwaleed, a Saudi Arabian billionaire who is one of the biggest single investors in blue chip businesses such as Apple, Citigroup and Disney. As Pitpass has reported, Alwaleed now has little interest in investing in F1.

Prost already has an association with Formula E as he is a brand ambassador of its technical partner Renault. The launch event tonight will take place at Renault's flagship showroom in Paris and it will also be attended by Jean-Paul Driot the founder of French company Dams, which runs teams in World Series by Renault as well as F1's feeder series GP2 and its support series the Porsche Supercup.

Prost's team is the fifth of ten outfits to be officially announced by Formula E. Lord Drayson, the pharmaceuticals entrepreneur and former Minister of State for Science and Innovation, will enter a team from a base in Oxfordshire. Another will be run by Chinese motorsport boss Yu Liu and, as Sylt revealed in July, IndyCar outfits will also join the field: Andretti Autosport and Dragon Racing.

The Formula E car was launched last month at the Frankfurt motor show and is a collaboration between many famous names from F1. As Sylt has revealed, Williams will provide the batteries, McLaren will make the cars' 300bhp electric motors, Michelin will supply the tyres and watch company TAG Heuer will handle timing.

As Pitpass also predicted back in March, the series will even race on F1's most famous location – the streets of Monte Carlo. All of the races will be held in city centres and there will be a total of ten including exotic locations such as Hong Kong, Los Angeles, Miami, Rio de Janeiro and Beijing where the series will launch in September 2014.

Formula E has not yet announced who will drive for its teams but some well-known names are expected to be amongst the field. Agag says that they will largely be ex-F1 drivers with Bruno Senna hotly tipped to be one of them. Formula E's development driver is former Virgin Racing driver Lucas di Grassi so that is an indication of the standard it is expecting. They have a good incentive as the prize fund will be £310,000 ($500,000) per race giving a total of £3.1m ($5m) per year. Expect more big announcements soon.