The latest stop on the final flyaway leg of the 2013 season saw the teams descend on the classic track of Suzuka. Unlike any of the other tracks on the calendar Suzuka's 3.6 mile layout is in a figure-of-eight configuration and offers an array of corners, whilst elevation changes only heighten the challenge.

The season is now winding down to its conclusion and as 2014 is such an upheaval in terms of the regulation changes we find the teams are not bringing the usual array of developments through.

Not able to carry across any major parts for the start of 2014 due to the significance of these changes the teams are instead utilising what they already have, making gains through setup, tyre management and strategy.

The Red Bull team and Sebastian Vettel are almost certainly going to collect their fourth respective consecutive championship titles this year. Adrian Newey is an obvious absentee on the pit wall keeping in touch from the strategy room in Milton Keynes instead. Newey has decided that with the team likely to clinch the title before it comes to its conclusion his time is better placed back at the factory directing the team for the 2014 season ahead.

Even without Newey at the track what impresses me is how they are going about the latter part of this campaign, perhaps with one eye on how they have to adjust for next season. They have, over the last few races, opted to operate outside of their usual comfort zone of running with what you'd call a dirty downforce configuration. They're doing this by running a shallower rear wing angle of attack thus reducing the induced drag on the component, this has led to a rise in the team’s usually low speed trap speeds.

Counter intuitively though their apex speed remains high when compared to other teams and so we are finally seeing the just how much downforce the team is able to leverage from the underfloor/diffuser of the RB9. The characteristics shown are reminiscent of when the team visited Suzuka in 2011 with the RB7, which as we remember was fitted with the off throttle blown diffuser. I mention this as Red Bull more than any other team at the tail end of that season was able to run with DRS open around big portions of the lap. 130R springs to mind as a corner that would benefit you hugely should you be able to chuck away downforce, we saw this in 2011 when drivers had their DRS open all the way through there.

Does this therefore suggest Red Bull currently has the pace to match the RB7? Well we are working with a different qualifying format whereby DRS is now limited to just the activation zone but at only half-a-second off 2011's pole time you have to admit it's pretty impressive. This of course brings credence to the 'Perfect Storm' I wrote about recently and moreover the way in which Red Bull is extracting performance from its exhaust solution others cannot.

Vettel's lack of KERS for Q3 on Saturday should be fairly alarming to the other teams as not only was he carrying around 40kg's of ballast that wasn't gaining him any additional power, the balance of the car would have been significantly different without KERS harvesting energy throughout the lap. 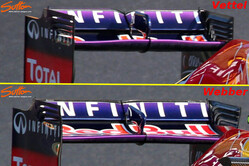 The drivers had very different configuration rear wings, although as I previously stated both were running much shallower angles of attack than the rest of the field. Everything about the design of the two wings differ: Vettel's wing features a much deeper V Groove in the central portion of the upper flap, a deeper top flap which would allow for a slight increase in DRS over Webber's. Vettel's endplates feature a straight leading edge and four louvres whereas Webber's endplates feature a curve and only three louvres. The leading edge of Vettel's mainplane is much more upwardly curved in the central portion and, lastly, the DRS actuator pods are also marginally different in size.

Of course this will likely boil down to driver preference and over the course of a lap the deficit will be marginal. Where it will make a larger difference however is balance, which also leads us onto tyre wear. I mention this because of the different strategy the Red Bull drivers had to use during the race which has once again led to the team’s political tactics being called into question

Whilst both drivers started on the option tyre, being stuck behind Grosjean at the beginning of the race hampered Webber's first stint. The aero losses associated with being in the 'dirty wake' of the leading car were much more prevalent on Webber's car than if Vettel had been sat in the same position. This is due to the efficiency loss from Webber's lower downforce rear wing in mid/high speed corners. Meanwhile Vettel began pacing himself or 'gapping' to Webber to ensure he too didn't suffer rear tyre slip from overworking the rear of the car. For Webber it was a ‘damned if I do and damned if I don't’ scenario, as with the revised Pirelli tyres once you get them into a thermal window it's much more difficult to lower the temperatures. This meant that once engaged Webber had to continue to try and close the gap to Grosjean, who was also running with good pace, and effect an overtake.

Unable to get past Grosjean led Webber into an earlier stop to try and undercut him, taking to the pitlane at the end of lap 11 to claim a set of Prime tyres. Lotus however responded to this threat pitting their man a lap later. Meanwhile, Vettel, who had distanced himself from the pair, squeezed out his first set of tyres until lap 14 but returned to the track in third. This later stop was one of the pivotal factors in Vettel's victory with the German now on fresher tyres.

Webber, once again unable to make a large enough dent in Grosjean's lead, found himself in the same predicament as his first stint requiring another stop at the end of lap 25 (14 laps on that set of Primes). Whilst the tyres were not completely shot the team had realised the best shot they had of taking a 1-2 was to allow Vettel to chase Grosjean on a two-stop strategy or try and force Grosjean into reacting and switching to a three-stopper like Mark. With Vettel on fresher tyres and Webber now out of sync both the Red Bulls had a pace advantage over the Lotus taking chunks of time out of the Frenchman.

Grosjean made for the pits at the end of lap 29 and was easily overtaken by Webber during the stop, at this stage it was obvious that Webber needed to start pulling out a bigger margin so that he need not have to pass Grosjean on the track later in the race. The problem is that Webber's tyres were 5 laps older and so extracting the required differential would become more difficult.

Vettel meanwhile in clean air was not only able to continue extracting performance from his tyres that were two laps newer at the start of the stint, but was able to go a further six laps into the race on that set of tyres stopping at the end of lap 37. Although he didn't overtake Grosjean through the pit phase it did put the German in touching distance.

Three laps later we find Vettel battling with Grosjean at the end of lap 40, as the pair approach 130R it's clear Vettel has pulled in closer but he also uses his fresher tyres/better grip to brake alongside Grosjean into the last chicane. Grosjean is therefore forced to take a shallower entry to the chicane compromising his exit, with Vettel now on the gearbox of the Lotus going into the last corner/pit straight you'd think the pass would be inevitable. The overtake for Vettel though is not only questionable in terms of speed differential but also the workload and state of mind of the driver to affect it.

Vettel triggered DRS from his top left steering wheel paddle as he rounded the last bend and perhaps surprisingly and immediately almost ran into the back of Grosjean. His first reaction however was to deactivate DRS knowing that as he swerved right to avoid Grosjean (who was also filtering right to try and cut off Vettel's advances) it would destabilise the rear end. Vettel then proceeded to pass Grosjean along the straight before realizing that DRS wasn't active, re-engaging it again just as he pulled in front to get a better line for Turn 1. An elegant pass without the full use of DRS by a driver that most consider cannot overtake, as the onboard footage didn't show the graphic overlay I can't ascertain if KERS was being used however.

For Suzuka the team once again made a revision around the rear brake ducts and returned to a specification run in previous races. As we can see from the image above the team has applied flo-viz to both the brake duct fins and diffuser to make sure they are working together. The inset is from the Korean GP and shows that the lower fins are detached from the upper elements. The rear brake duct fins play an important role as the airflow they dissipate not only helps to guide the exhaust plume vicariously toward its intended target, but also create its own aerodynamic load onto the rear tyres. This is a crucial aspect when we look at the way the driver is able to manage his rear tyres and so it's an obvious focal point for all the teams when looking at the characteristics of each track.