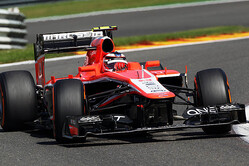 Max Chilton began today's Japanese Grand Prix as the Marussia F1 Team's lead charge and ended up as their lone ranger, after Jules Bianchi's race was over at the first corner following a coming-together with Giedo van der Garde.

Max started the race from P18, ahead of all three of his closest competitors, but the bigger challenge would be to remain ahead of the Caterhams in the race, confirming the Marussia's fresh turn of pace. That task was made a little easier when he was left with only Charles Pic to contend with, but nonetheless Max led that particular battle from the front for most of today's 53 lap race. Struggling rather more on the prime Hard tyre he took on for the final stint, with just six laps of the race remaining he ventured onto the marbles which pitched him off track, allowing Pic to take advantage and gain position. Following Lewis Hamilton's retirement, Max is now the only driver to have finished each of the 15 rounds so far this season.

One of the Grands Prix which Jules had been most looking forward to in his debut season turned into a weekend to forget, almost from the start. Despite a valiant attempt throughout the weekend to improve his fortunes, success at Suzuka was ultimately a little too far out of reach it seemed.

Max Chilton: "Generally this has been a really positive weekend for me and one where we've made all the right moves. It was great to qualify ahead of my three nearest competitors for the first time yesterday and today I held position for most of the race, so it was pretty disappointing to lose out just a few laps from the end. I was happy with the way our race was panning out but on the prime tyre in the final stint I struggled a lot more and made a small mistake going onto the marbles, which caused me to go off. From then on, with those tyres, there was little I could do to recover. Although we lost out in the end, I think we have to focus on the positives. The car is a lot stronger and we are in a good place for the fight with the Caterhams."

Jules Bianchi: "All in all I think this is a weekend that was destined not to come my way, which is a shame as I love the Suzuka Circuit. We did our best to fight back and I was very confident in the way we would approach the race. Unfortunately, as I turned into the first corner on the opening lap, van der Garde hit my rear wing which pushed me off track and into the gravel. Nothing more to say really, except my thanks to the Team for a lot of hard work this weekend. We'll be back to do better in India I hope because there are good signs for the car performance."

John Booth, Team Principal: "A disappointing end to a weekend where we've seen some very positive signs with car performance. Jules' start was again fantastic this week and this enabled him to jump Giedo van der Garde. Had his race continued, then with the turn of pace that we saw on his long runs on Saturday morning, we feel sure he would have had a strong showing. Max was enjoying a good race and we were managing his pace well in order to ensure we made the two stop strategy work. Unfortunately he struggled a little more on his last set of prime tyres and he ended up running wide, which let Charles Pic through. Overall we have good reason to feel encouraged by many aspects of this weekend and we are looking forward to introducing some smaller developments for India, which we hope will continue to improve the pace of the car."