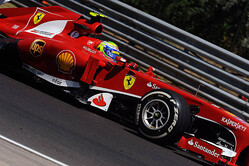 Fernando Alonso: "It's hard to talk about Maria de Villota right now, as I had only just taken my helmet off, when I was told about her death and at the moment, I still can't believe it and need a while to stop and think about it. Of course, it's very sad news for the world of motorsport as Maria was loved by everyone.

Now, all we can do is pray for her and for her family. Back to the track, we were not as competitive as we wanted to be and now we must try and improve, putting together a series of changes that we already have in mind. Luckily, when I spun I didn't ruin the tyres: we also managed to use them on the long run with a full fuel load, even if we definitely lost a few extra tenths from the first lap. We hope to get a clean lap tomorrow and to be ahead of those cars, such as the Toro Rossos and the McLarens that we cannot have in front of us, as happened today".

Felipe Massa: "Today, we did all we could and managed to get through all our programme. It's hard to know how to rate today because it's only Friday and there are a lot of cars that are very competitive. From tomorrow, I hope to have a faster car, which will allow us to fight with those ahead of us. We will definitely do our best in preparing for qualifying, but above all for Sunday's race. It's always nice to be at Suzuka on this fantastic track, which is one of the best we race on".

Pat Fry: "It was a demanding day of testing in which, once again, we tried to optimise the set-up of the cars to adapt them as well as possible to the characteristics of the track. At Suzuka, one move in the wrong direction carries a heavier price than at other tracks and so it's necessary to come up with a configuration that gives the drivers as much confidence as possible in all three sectors. In the first free practice session, with Felipe we did a few aero tests, an area in which we are trying to improve, to be as competitive as possible when tackling the final races of the season. With Fernando's F138, in the morning, we worked on set-up, making a few changes to give the car more grip. In the afternoon, with both drivers we concentrated on the usual comparison between the two compounds brought here by Pirelli: the performance gap between the Hard and Medium does not seem excessive, but we will try and understand more about their wear characteristics, taking into account the fact that usually, the degradation is particularly significant. We didn't manage any quick laps on a low fuel load and so I don't think the final Friday time sheet is particularly representative. Now we must be cautious, trying to reduce the gap to our closest rivals, while also not underestimating what those behind could do. This evening we will pay maximum attention to all the data we have gathered and assess every possibility for improving. In order to tackle what is a difficult track for the drivers as well as the engineers, it's absolutely vital to get the car as well balanced as possible".