As the late fly-away season continues, the teams descended on the Yeongam circuit in Korea, the purpose built circuit which was lauded when it first entered the calendar for its semi street circuit appearance.

As the seasons rolled on it the once planned leisure city has yet to come to fruition and now the circuit finds its place on the 2014 calendar on the danger list.

The second of only three anti-clockwise circuits on the 2013 calendar (Singapore & Brazil are the others) you'll often hear it referred to as 'front limited' this is because the technical nature of the circuit dictates that you require a good front end on the car. This puts significant strain on the front-right tyre as the surface is pushed laterally across the circuit as the driver asks it to give up its grip.

In the wake of the comments levelled by Gian Carlo Minardi on what he believed to be some interesting differentials between Vettel and the rest of the field (even his team-mate Webber) at Singapore, I felt compelled to look at the technical intricacies of what makes the RB9 intrinsically faster than the competition. As the article highlights we cannot simply single out one aspect of the car and expect it to reveal answers but rather look at both the overall technicality of the car and Vettel's bond with it.

It did however become apparent in Korea that I had missed a design factor that Red Bull had put into practice after the change back to the 2012 tyre construction. The floor and diffuser has been a key feature in Adrian Newey penned cars over the years but none more so than this lineage of Red Bull cars. (Starting at the RB5).

It's worth arguing that the RB9 in its current guise has an exhaust solution that is maximizing the amount of downforce at the same level as when the RB7 used a full EBD (exhaust blown diffuser) system. In the image (right) we can see where the periphery of the diffuser has been rolled up to create a 'scroll' this focuses the exhaust plume energy that is being made available at the diffuser’s tip, rolling it up into a vortex. This new, more concentrated vortex, entwines with the vortices generated within the diffuser giving a net gain. It's a complex matter (as we find with anything to do with diffuser flow but if you wish to know about it in more detail I have also completed a more expansive article on the subject)

As the season winds down teams have already started to shift focus toward their 2014 designs, with Adrian Newey an obvious absentee from the Red Bull pit-wall it's clear even the world champions are starting to work on next year’s challenger.

2014 throws up plenty of new design challenges not only with the new 'power units' that have been discussed at length but also some hefty aerodynamic revisions. Over the coming races I'm quite sure we will see teams operating a 'half way house' whereby they try to investigate potential avenues of development for next season. Invariably when investigating some of these avenues teams may also stumble across areas that may improve this year’s package also. 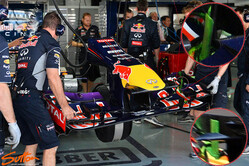 Mark Webber, seemingly Sebastian's test mule once again, did most of the assessment work during Friday's free practice sessions, before both drivers used the new front wing (pictured) for qualifying and the race. The wing features two vertical strakes behind the cascade element that will both vorticise and guide the airflow over the flaps and aid in the turning of the airflow around the front tyres. As I mentioned above these are likely a component born out the 2014 development plan as the team examines the options involved with running a narrower front wing.