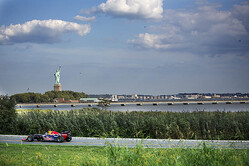 Few Formula One races have had as turbulent a history as that of New Jersey's Grand Prix of America. Before a single car has ever taken part in the race it has already been dropped from the calendar and had an almost complete change of management. It is due to take place in 2014 but according to a report on CNN by Pitpass' business editor Christian Sylt, F1's boss Bernie Ecclestone has given up hope that it will happen.

This should come as no surprise at all to longstanding Pitpass readers. Last year Sylt revealed that Ecclestone had dropped it from the 2013 calendar after the organisers missed payment deadlines in their contract with the F1 Group. We subsequently revealed that there had been an exodus of management including the chief financial officer and the chief marketing officer. The race was postponed to 2014 but just last month former F1 champion Niki Lauda told the Austrian media that Ecclestone has already taken the race off the calendar. As always in F1, money is at the heart of the problem.

In June Pitpass reported that UBS had been appointed by the race organisers to raise $100m which is required for it to go ahead. UBS confirmed that the organisers are even prepared to sell 100% of the business in order to get funding. It could be argued that this didn't send out the right kind of message and it seems that the market responded accordingly.

Ecclestone says that the race "is not on the cards for next year" and he adds that the problem is the organisers "haven't got any money."

It was planned to take place on 3.2-miles of public roads in Port Imperial, a district in the New Jersey towns of West New York and Weehawken. The track snakes alongside the Hudson river and would give the race a spectacular backdrop of Manhattan's historic skyline. Sadly it looks like we will never see it in F1.

The Grand Prix of America is already the only new F1 race for over 15 years which has been dropped from its slot on the calendar. It is also a rare example of a race which was given an F1 contract without having funding in place to go ahead. The most well-known previous example was that of Donington, the Leicestershire-based track which had a 17-year contract to host the British Grand Prix from 2010. Instead, the race stayed at Silverstone after Citigroup failed to raise the £135m required to fund necessary improvements to Donington.

Ecclestone says that the situation in New Jersey "is like Donington all over again." He says he signed the deal despite the organisers not having enough funding to proceed because he understood they would be able to raise it. The promoter is Leo Hindery junior a sometime racer and managing partner of private equity fund InterMedia Partners. "The guy is a multi-billionaire and is well-known in New York," says Ecclestone.

Construction on the New Jersey site is well under-way and last year Sebastian Vettel and David Coulthard drove demonstration runs on the circuit. However, a lot of the work has focussed on the (alleged) pit building in a new block of garages which was already planned to be built.

The project is close to Ecclestone's heart as he has been trying to hold a Grand Prix in the New York area since the 1980s. He has already provided more support to the New Jersey race organisers than their rivals usually receive.

After tearing up the original contract last year Ecclestone signed a new 15-year agreement in May when the organisers agreed to hire Chris Pook, one of his close confidantes and former chief executive of F1's American rival IndyCar. Pook works alongside Hindery who was the first investor in the race.

In 2011 Hindery provided the initial $10.3m investment in race organising company Port Imperial Racing Associates (PIRA) and obtained an additional $10.1m loan. In April this year the F1 Group itself provided the company with a credit facility personally guaranteed by Hindery but the race still needs $100m to get the green light.

F1 races require a high-octane level of investment. Tracks typically cost over $250m to build but using public roads avoids this expense. The downside is that there is no asset for investment to be secured on so the budget for street races is usually supplemented with state funding. However, Hindery has confirmed that no public money will be used to fund the Grand Prix of America.

The race is part of F1's strategy to break into the United States market which is dominated by local rivals NASCAR and IndyCar. Gaining a foothold in the massive US market is understood to be an important part of revving up the stalled plans to float F1 on the Singapore stock exchange.