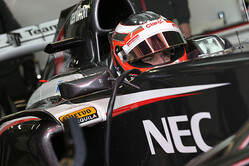 Sauber has issued an official statement following reports, originating in Germany, that its proposed deal with new Russian partners had run into problems.

"Due to erroneous reports and rumours circulating in certain media, we feel compelled to make the following statement:

The collaboration with Russian partners, as announced by us, is progressing well. The contract with driver Sergey Sirotkin is in place. Preparations for his involvement in the team, as likewise announced, will start next week following the end of the customary holiday period in the sector.

Beyond this, initial payments to the team have already been made, as per contract.

A financial involvement on the part of NIAT (National Institute of Aviation Technologies) was never mooted. The plan envisaged a purely technical partnership.

We are astounded at the heedlessness with which some media are prepared to spread false reports and rumours."