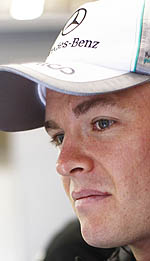 For a brief period following today's British Grand Prix Nico Rosberg's win looked in doubt as officials investigated a misdemeanour during the race.

Having won a race which saw his teammate lose the lead following a tyre failure, and having suffered a tyre problem of his own, Rosberg was subsequently hauled before the stewards after it was claimed he did "not make a significant reduction in speed whilst yellow flags were displaced in Turns 3 to 5, a breach of Appendix H, Article 2.4.5.1 (b) of the FIA International Sporting Code.

Having won the race by less than a second, and the first four covered by just 7.7s, even a 10s penalty would have been disastrous.

However, having investigated the incident, the stewards, led by 1992 world champion Nigel Mansell, found no evidence of a significant reduction in speed that is required under Article 2.4.5.1 (b) of Appendix H of the International Sporting Code and consequently Rosberg was merely given a reprimand.