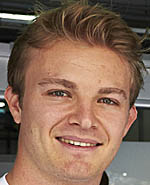 Nico Rosberg took his second career victory today at the Monaco Grand Prix on the streets of his home city. His win came exactly 30 years after his father, Keke, scored the second win of his own career at Monaco in 1983. Lewis Hamilton finished fourth after losing position during the pit stops at the start of the first Safety Car period. In spite of two Safety Car periods and one red flag interruption, Nico led every lap of the race after starting from pole.

Nico Rosberg: Monaco is such a special place to win and it just feels amazing today. It was my childhood dream to win this race and to do it in a Silver Arrow on the streets where I have lived all of my life is fantastic. I can't quite believe it has happened yet and it will probably take a while to sink in. Thank you to the team for the car that we had this weekend and it's good to have been able to show the same level of performance on Sunday and convert our pole position. The whole weekend went pretty much to plan, even though qualifying was tough with the weather conditions. I didn't have the best start today which meant Lewis and Seb got pretty close but after the first corner, I was able to set my own pace. Then it was just a case of keeping a cool head through all the incidents and the team did a great job of keeping me in touch with what was happening. Thank you to everyone here today and back at the factories in Brackley and Brixworth. I hope this win today is the first of many more to come for us.

Lewis Hamilton: It's been a great weekend for the team and I'm really happy for everyone. Big congratulations to Nico, he's been awesome all weekend here and really deserves that victory. From my side, this weekend hasn't really been the best and we didn't make the most of the opportunity for a one-two finish today. When the safety car came out, I needed to maintain a gap so we didn't get delayed with the double pit stop but unfortunately the gap was too big and we lost out to the two Red Bulls. That's motor racing and these things happen sometimes. It's the tightest track in the world here and virtually impossible to overtake unless you are much quicker than the car in front so there was nothing I could do to improve my position. But it's great for the team to have achieved our first victory of the season and I hope we can carry through the performance we showed here to Montreal.

Ross Brawn: Congratulations to Nico today. He did not put a foot wrong all weekend, topping every session and driving a very poised and controlled race. He richly deserves this second win of his career. Lewis was running very comfortably in second position until the Safety Car period just before both drivers had made their first stops. The team did a fantastic job all weekend in a challenging qualifying session and a difficult race. But we are all aware, Monaco is not a completely representative circuit. We will take the time this evening to enjoy our success but know that we need to keep pushing to understand how to extract the maximum from our car at every circuit and keep improving further.

Toto Wolff: Nico was dominant not just this afternoon but all weekend. He did everything right from the first lap on Thursday and he really earned this victory. Lewis lost some time in the second sector on his in-lap behind the Safety Car and that cost him position to the Red Bulls, so we need to find out what happened there. As for the team, congratulations to everybody in Brackley and Brixworth. The guys at the track overcame all the obstacles that were put in their way this weekend and the team at the factory have achieved a great step in performance with the car. Now we need to keep pushing so we can repeat this taste of success at different types of circuit through the rest of the season.