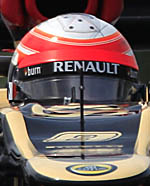 Ahead of today's second practice session the air temperature is 31 degrees C, while the track temperature is 39 degrees. There was a brief rain shower a short while ago but one would hardly know it.

Felipe Massa led a Ferrari 1-2 this morning, ahead of Nico Rosberg, Sebastian Vettel, Paul di Resta, Jenson Button, Mark Webber, Adrian Sutil, Kimi Raikkonen and Romain Grosjean. Other than the Ferraris, the Red Bulls look impressive, as does the Lotus and Force India.

The greenness of the track, combined with the sand, made for a number of off-track excursions this morning, but nothing of consequence. Turn 10 proving particularly tricky.

Despite the fact that China was only a week ago, a number of the teams are trying out updates today, whilst Grosjean appears to be benefitting from a brand new chassis.

As ever, we didn't see the option (medium) tyre this morning however, that will change this afternoon.

Giedo Van der Garde and Jules Bianchi, who were replaced by their teams' reserve drivers this morning, get their first taste of the BIC this afternoon.

Chilton gets the session underway, the Englishman having out-paced Rodolfo Gonzalez this morning. In no time at all the Marussia driver is joined by ten others including Button and Hamilton.

Chilton posts 1:38.700 as Van der Garde goes second ahead of Vergne and Bianchi. Moments later Button posts 36.164 only to be eclipsed by his McLaren teammate's 35.866.

Just seven minutes into the session all but the Ferraris are on track, it is surprisingly busy.

Webber goes straight to the top of the sheets with a 34.664 while Raikkonen and Vettel abort their laps. Hamilton, having posted a 36.693, runs wide and fails to improve next time around. Vettel can only manage 37.500.

Hamilton improves to fourth (35.429), ahead of Sutil, Perez and Button.

A scary moment at Massa almost trips up over a very slow Rosberg, the Brazilian's quick reaction absolutely electrifying.

Eighteen minutes into the session, the Toro Rosso duo is first to switch to the option rubber.

"Traction is so bad we may have to do something with the rear camber or something," claims Van der Garde. "I have absolutely no grip, zero."

As Vergne (option) improves to seventh (35.506), Alonso also switches to the softer rubber. Shortly after, Ricciardo goes eleventh with a 35.761.

Vettel joins his Red Bull team 'mate' at the top of the timesheets, the German posting 34.282 to go second. However, all eyes are on Alonso who only marginally improves having lost time in S3.

Massa can only manage PBS, albeit three of them, as he posts 34.552 but remains fourth.

Button (prime) posts a PB in S1 before losing a heap of time in S2. Rosberg (option) remains fifth despite improving his time (34.666).

Hamilton improves to sixth on the options, just ahead of Sutil the highest placed prime runner. Now on the softer rubber, the German posts a PB in S1 as Grosjean goes fifth quickest overall (34.631). Sutil posts another PB in S2, finally crossing the line at 34.932 to remain seventh. Teammate di Resta however, improves to fourth with a 34.543.

Raikkonen goes quickest in S1 and again in S2 however he makes a mistake in T13. Despite another mistake The Iceman goes quickest overall, crossing the line at 34.154, 0.030s quicker than Webber.