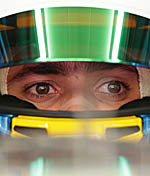 After a short break, the Sauber F1 Team is off to Shanghai where the UBS Chinese Grand Prix will take place from 12th to 14th of April. After Nico Hulkenberg scored four points for the team at the Malaysian GP, the Swiss race outfit is currently sixth in the constructors' championship. After analysing the data from the last race in Malaysia, new parts have been built and will be tested in Shanghai.

Nico Hulkenberg: "The circuit in Shanghai is not particularly one of my favourite tracks, nevertheless it's a demanding one, especially the first few corners and the corners before the back straight. Tyres and strategy will be very important during the weekend. At the beginning of the race in Malaysia my rear wing endplate was damaged, which caused a loss of downforce. I have a better feeling now I have driven my first race in the C32, especially because we were able to collect a lot of information. In Malaysia we scored points and that is also my goal for China."

Esteban Gutierrez: "I don't actually know the track yet, so it will be an interesting challenge again to learn the circuit and then to develop confidence throughout the practice sessions. I have heard it is a very complex track with some fast corners and, at the same time, is very technical. Learning a new track all depends on the approach you take. You can learn a lot through video footage, your engineer's advice on the right gears in different parts of the track and, most important of all, the more confidence you have in your car the easier it is to learn a new one. Compared to the first race in Melbourne, I now know the car so I can focus on learning the track. My goal is to improve and I'm looking forward to that."

Tom McCullough, Head of Track Engineering: "The Shanghai circuit has a good mix of low, medium and high speed corners. The track has several technical sections where corners lead straight into further corners requiring a good car balance and precise driving. The smooth track surface and typically low track temperatures have a significant impact on how the tyres perform - especially at the start of the race weekend whilst the track is cleaning up. Pirelli have allocated the Soft and Medium compounds which is the first time we have this pairing this season. We analysed the data that we collected in Malaysia and found interesting directions for the development of the car, therefore we will bring several test parts to Shanghai. Having secured our first points of the season in Malaysia, we are eager to add to them as soon as possible."