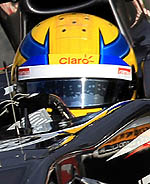 The start to the 2013 season didn't bring the expected result for the Sauber F1 Team. Nico Hulkenberg was not able to start the race due to a fuel system problem. Esteban Gutierrez started his first ever Formula One race from 18th and finished first of all rookies in 13th.

Nico Hulkenberg: "I'm bitterly disappointed about what happened today, but at the same time I'm not blaming anyone. Things like this happen in racing. What is particularly bothering me is the fact that I lost all this mileage today, which is so important particularly at the beginning of the season. It would have given me a lot of valuable data and information for the next races. Obviously, Melbourne is not a good place for me. It was my third Grand Prix here and the third time that I leave this place empty handed. The only good thing is that the next race takes place next weekend."

Esteban Gutierrez: "My main goal was to finish the race, and to achieve that is really enjoyable. I want to thank the whole team, because yesterday in qualifying we had a good chance and today we were able to recover some of what we lost yesterday. We have a good base and in the future we will try and push forward."

Monisha Kaltenborn, Team Principal: "This was not the way we expected the new Formula One season to start, particularly after things looked quite good in the free practice sessions. The problem with the fuel system was unlucky, particularly at this point in the race weekend. We are very sorry for Nico. Esteban drove a solid first race, however, starting from P18 was too much of a handicap for him. I'm confident we will solve the problems we had and that we will be in better shape in Malaysia."

Tom McCullough, Head of Track Engineering: "Clearly disappointing that Nico was not able to start his first race for the Sauber F1 Team, due to a fuel system problem which didn't allow us to make the grid. For Esteban starting from 18th was always going to be difficult, but he drove a good race, managed the tyres well and worked well with the engineers, which was positive. We will regroup now and make sure we will get the maximum out of the car in one week's time in Malaysia."