Hulkenberg not expecting to surprise 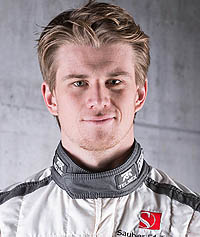 Nico Hulkenberg is relaxed and comfortable at Sauber, despite having only joined the Swiss team in January.

The highly rated German, who led the Brazilian Grand Prix last year, announced in October his intention to switch teams. It was a move which caught many by surprise, most notably Force India itself which had tentatively included the German in its plans for the future.

Many questioned the logic in moving from Silverstone to Hinwill, seeing it a sideways move rather than forward step for the twenty-five year old. Hulkenberg sees it differently, though he wouldn't share his full decision making process.

"There's a lot of things playing into such a decision," he said. "Sauber had a very strong basis, a solid foundation last year."

Past performances stand for nothing however in the harsh and competitive world of Formula One. "We are in a new year, a new situation," Hulkenberg warned. "You can't take it for granted that it will be the same. Nobody knows. We'll have to work hard and we'll try our best to make it a good year.

"I think as a team and for myself you always, as a default, target a top ten in both qualifying and race," he added. "It's always your desire and what you come to fight for because at the end of the day you want to challenge for points."

But for all his optimism Hulkenberg remains a realist, not expecting to surprise us, even though he'd like to. Sauber is not a truly front running team, and ahead lies a long and challenging season even if, unbelievably, it does look to hold an edge over McLaren at present.