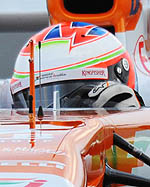 The Australian Grand Prix will be a step into the unknown, according to Paul di Resta. Entering his third season in Formula One with Force India, the Scot believes the new Pirelli tyres will give all teams plenty to think about.

"You're arriving here in a quite strange situation as there's a tyre that nobody's done a lot of work on in the winter test," said the Scot. "I think Pirelli has come with a nice aggressive tyre strategy and the super-soft ultimately will give us a good peak grip for a lap's performance. It's about making that last in the race as well for whatever stint you use it."

Melbourne has been in the midst of a heatwave recently with a string of days over 30 degrees Celsius in the build-up to the weekend. Conditions have eased towards the end of the week with temperatures dropping down into the mid-twenties, a change which di Resta feels could be a saving grace.

Tyre wear was a concern for many throughout pre-season, though largely dismissed by Pirelli who stated that conditions were simply too cold to get the new-for-2013 rubber working. Conversely, while conditions in Spain were too cold the Melbourne heat-wave of last week would likely have caused the tyres to overheat.

"It probably helps the tyre choice," said di Resta of the cooler conditions expected this weekend. "The two compounds that are here are within the working ranges, both the medium and the super soft. The soft and the hard are the higher working range, for the higher temperature."

Tyres have become a talking point as the disparity between the two compounds, believed to be as much as a second a lap, creates a strategic conundrum for the teams. That is complicated by HRT's demise over the off season which has seen a rework of qualifying, with six cars now eliminated from each of the first two phases.

With question marks over the super soft compound's longevity it's not impossible that some teams could opt to miss out on the final phase in order to save tyres.

It is a notion dismissed by Daniel Ricciardo. "Starting in the mid-pack and taking that risk to save tyres is obviously putting yourself in a bit more of a tight situation potentially on the first lap with more cars around. The thing is, if you're able to fight for the front row you go for it, that's the logical one for me."

Pirelli boss Paul Hembery meanwhile stands firm with his assessment of a two to three stop race, while Sauber's Esteban Gutierrez told his team that the tyres were "very consistent," during Friday's opening practice.