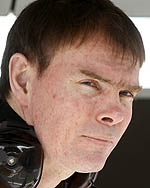 Ahead of the final pre-season test, Lotus has played down a move by the FIA that sees (engine supplier) Renault forbidden to use new engine mapping settings it had designed for 2013.

The FIA issued a clarification last year that banned engine mappings that made use of exhaust blowing however, Renault was under the impression that this only applied in 2012. When the French manufacturer approached the FIA for permission to run the revised engine mapping claiming that it would help optimise exhaust blowing and thereby exploit the controversial Coanda effect exhaust the sport's governing body rejected the move.

"The suggestion it will slow us down is nonsense," he told BBC Sport. "Renault had come up with some alternative engine maps to try. They talked to the FIA about it but Charlie Whiting didn't want us to use them.

"Kimi has used the new one once on an installation lap and hated it," he continued. "Romain used it in the wet last week on the final day and it finished up OK. But all his running in the dry has been without it.

"It is about partial and full-throttle blowing and modifying maps to get more or less of each, but the amounts (of advantage) we're talking about are tiny. To suggest it will slow us down is nonsense."

Speaking at the FOTA Fan Forum in Barcelona this evening, the team's Technical Director, James Allison, also played down the negative impact of the FIA's ruling.

"The job of an F1 team is to stay inside the rules but you generally try and explore the boundaries of those rules as much as you can, because to do otherwise is to throw away performance needlessly," he said. "So there are a set of published and clear rules on what you are allowed to do with engine maps, and Renault explore those rules in the same way as the other engine manufacturers do.

"We were experimenting in testing, on the last day of the last test, with an engine map and we explained to the FIA what we were doing. But having run it on the track and found it didn't work very well anyway, we learned from the FIA that they were not so happy with what we proposed. So we are not doing it."

Ahead of last year's German Grand Prix, Red Bull was referred to the stewards for anomalies with its engines. A statement subsequently distributed by the FIA to the media read:

"Having examined the engine base torque map of car numbers 01 and 02 it became apparent that the maximum torque output of both engines is significantly less in the mid rpm range than previously seen for these engines at other Events.

"In my opinion this is therefore in breach of Article 5.5.3 of the 2012 Formula One Technical Regulations as the engines are able to deliver more torque at a given engine speed in the mid rpm range.

"Furthermore this new torque map will artificially alter the aerodynamic characteristics of both cars which is also in contravention of TD 036-11."

Article 5.5.3 of the Technical Regulations states:

"The maximum accelerator pedal travel position must correspond to an engine torque demand equal to or greater than the maximum engine torque at the measured engine speed.

"The minimum accelerator pedal travel position must correspond to an engine torque demand equal to or lower than 0Nm."
It is unclear at this early stage what the announcement will mean for both Sebastian Vettel and Mark Webber, and if there will be any penalty applied.

The FIA was subsequently forced to clarify technical regulations after Red Bull were found to be exploiting a loophole whereby the Milton Keynes squad had developed a specific engine map which failed to deliver the engine's full torque. Instead the excess energy was expelled from the engine as a gas, which was then directed over the rear of the car. In essence Red Bull had reintroduced exhaust blowing, a concept the FIA had worked hard with teams to outlaw at the end of 2011.

The FIA referred Red Bull to the race stewards in Hockenheim, which admitted that while unimpressed by the teams' arguments what it was doing was not against the letter of the law. However, the teams subsequently received a note from the FIA clarifying the regulations, which stipulated the tolerances within which teams were allowed to alter their engine map.