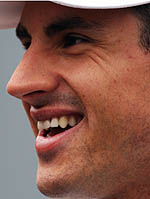 After more than a year out of the sport Adrian Sutil has made his Formula One return, completing 78 laps during testing in Barcelona.

It marked the first time the German had been in an F1 car since the 2011 season ended, and allowed him to show himself to his prospective Force India employers.

"I think I've done everything to do my comeback here, and now it's up to (the team) to decide," Sutil explained.

"There is one more competitor in there and for sure it's not all about driving, maybe it's also a little bit of business behind it, but I can't do anything else. I did a good day, that was very important for me so I can sleep without any worries, let's say."

Force India is the only team yet to announce its full driver line-up, with only Paul di Resta confirmed at the Silverstone-based squad. Sutil and the team's 2012 reserve driver Jules Bianchi are both in contention for the drive, though deputy team principal Bob Fernley stresses there is no rush to make a decision.

Speculation has suggested that whichever driver is ultimately chosen could be a result of an engine deal for 2014. Force India currently sports a Mercedes V8, though Bianchi has close links with Ferrari and there have been suggestions the team could switch to the Italian marque's turbo power plant next year.

"If you think about it; it has to be something else otherwise they would have confirmed the driver in January with plenty of time before the first test," said Sutil, acknowledging a decision will likely not be made on talent alone.

"Now it is not optimum for the preparation for Melbourne, but I think Vijay (Mallya) is behind it and he will make a decision as quick as possible," he added. "For sure there is some business behind there. I don't really know but the most important (thing) for me was to deliver the performance here, so I have done my part."