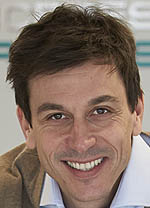 The appointment of Toto Wolff as Mercedes new head of motorsport last month stunned many Formula One insiders as it seemed to come out of the blue. It turns out that even Wolff was surprised by the speed at which things happened.

Speaking to Pitpass' business editor Christian Sylt, Wolff has revealed that he was offered his new position just days after he began talking to Mercedes about its plans following the departure of his predecessor Norbert Haug in December.

Haug left after dismal performance on track as Mercedes has only won one race in the past three years despite having what is widely considered a blockbuster budget. As Sylt recently revealed, last year the team's F1 campaign had a £125.7m budget fuelled with income from sponsorship, prize money and cash from Mercedes' parent Daimler which had revenue of £91.2bn (€106.5bn) in 2011.

Wolff was poached from Williams last month and he is understood to have taken a 30% stake in Mercedes' F1 team. Its non-executive chairman, the three-time F1 champion Niki Lauda, owns 10% and the remaining 60% is in Mercedes' hands. Wolff is the ideal man to steer the team back to success as he has experience behind the wheel as well as being a skilled motorsport manager.

Wolff started his motorsport career in the 1992 Austrian Formula Ford Championship and two years later he won his category in the 24 Hours of Nurburgring. He then moved to GT racing and became vice-champion of the Austrian Rally Championship in 2006. Wolff's relationship with Mercedes began in the same year when his Marchsixteen investment firm bought a 49% stake in HWA, the company that runs the car manufacturer's DTM touring car programme.

"I know [Mercedes] quite well and we were talking about the situation in DTM and about Norbert Haug leaving. I was asked my opinion and from talking, within days it accelerated so much that the opportunity came up where Mercedes were asking would you like to run our worldwide motorsport activities and be involved as a shareholder in the team because we believe we need a kind of managing partner for those activities."

Wolff says that despite Mercedes' rich racing heritage its failure as a team owner had led it to question whether it really understands motorsport. Mercedes' history in F1 dates back to 1954 but its most recent involvement as a team owner began in 2009 when it took over Ross Brawn's eponymous outfit.

Mercedes told Wolff that "we are a group with 100 billion Euros in turnover but we are not sure whether we really understand motorsport. We would like a professional who is not only a manager but is also a co-shareholder, who is involved financially, has entrepreneurial risk and is therefore someone we would be comfortable with."

He adds "it was almost incredible, within days it accelerated so much that I was facing the question of whether I want to continue with Williams, a team I like a lot. It was important for Mercedes that this is not a financial investment. It is the entrepreneur who is going to run the activities that is buying in and is not buying in a 5% or 10% stake but is in the game."

Wolff says that he spent "two painful weeks" over Christmas deciding whether to leave Williams. "On one side I love the team, I like its people and I love every day coming in there. Its warmth was a nice feeling and we kind of turned around the whole thing. In the current economic and financial environment it was quite a task and I think we did well. Then came this opportunity and I have been involved with Mercedes for almost seven years with HWA running the DTM activities and knowing the people. They know me well."

Although Wolff has resigned from the Williams board he retains a 15.4% stake in the team and says that there is good reason for this.

"I feel a certain moral obligation towards the Williams family and towards its employees. I have been spending a lot of time with some of them, especially at racing, and I said I will not let them down by saying I have a great opportunity, maybe a once in a lifetime opportunity, but I am going to sell your shares to the first person who shows up." As Sylt recently revealed, Wolff has no worries about conflict of interest and it is this kind of loyal attitude which makes him an even more valuable asset at Mercedes.