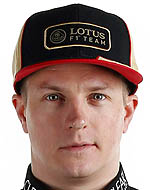 What are your thoughts heading into your second season with Lotus F1 Team?
I'm feeling pretty good. Last year was my return to Formula 1 and it went pretty well. This year will be my second with Lotus F1 Team and my eleventh season overall in Formula 1 so I've got a pretty good idea of what to expect. I'm sure it will be an exciting season and I'm sure there'll be lots to talk about. For me, I will continue to do the best I can; let's see how good our car is, and how good the cars of our opposition are too.

Is the continuity of going into your second season with the team beneficial to you?
It helps. It's not a massive thing which will suddenly mean you start winning all the races, but it's nice to be at the same team as you understand how they work, and they understand how you work. We quickly developed a pretty good way of working together last year and there's no reason to think that won't continue this season.

Are you still learning as a driver?
I don't think you ever stop learning, but there is less to learn than if you're a rookie. I don't think I could say I'm a rookie. We had new tracks last year, and that's always something nice to learn - and best learnt for me on the tracks themselves. There will be a new car which we'll want to develop and get working at its best. There are always changes in the sport, some small, some big. Generally, everything's pretty similar, and the feeling of racing on track is pretty familiar.

This is the second year of a two-year deal. Are you thinking of 2014 and beyond?
I'm not really thinking beyond this season at the moment, but I'm sure there will be talk before the end of the year. I enjoyed my comeback to Formula 1 last year and there's no reason to say I shouldn't enjoy the 2013 season too. I know there will be big changes to the cars and regulations for 2014, so who's to say that won't be exciting.

Have you set yourself targets and objectives for the season?
To do the best job I can. I've not driven the E21 yet so it's difficult to say what could or could not be possible. We know we had a good car last season, but everyone is working hard to make the best car. I will be working with the team to help get the car as strong as we can, then in Melbourne we'll have our first taste of results. It's a long season from there. 2012 was a good start, let's see what we can do in 2013.

Do you think the team has what it takes to win a championship?
Yes, I think they do. It's clear from working with them that they are racers, and you can see in their history that they've won championships. Nothing I saw last year made me think that another championship was impossible in the future. Of course, there is some pretty tough competition out there, and everyone wants to win. The team have beaten everyone before, there's nothing to say they can't do it again.

Are you looking forward to working with Romain again?
We had a pretty good relationship last year and it's clear he's fast and motivated. On track we were pretty close to each other at times but we didn't have any issues. It's good when you have a team-mate who's fast and works hard. I think we should be fine in 2013.

Do you think you proved a point in 2012?
Maybe for other people, but not for myself. I knew I could still perform well in Formula 1 given the right opportunity; it was only other people who had doubts.