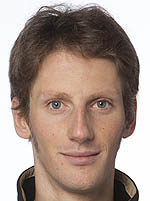 It will be a frustrated Romain Grosjean who faces the stewards after coming together with Pedro de la Rosa during the first phase of qualifying today.

On a damp track, and with the session drawing to an end, Grosjean closed on de la Rosa as the pair approached the front straight. Grosjean expected de la Rosa to move aside but the HRT driver instead held the racing line, the pair making brief contact. It resulted in Grosjean limping back to the pits with a damaged front wing which ultimately eliminated him from the session.

Afterwards the Frenchman was fuming, suggesting he'd been held up for an entire lap. "I was going to overtake him in a straight line," he explained. "I don't think he saw me and pushed me into the barriers. I braked as much as I could but we had contact.

"I was on a flying lap when I was hit by another car," explained de la Rosa. "It was a dangerous manoeuvre because I couldn't move aside given the track conditions. As a consequence of the impact, the rear suspension bent and also punctured the rear tyre."

The incident was referred to the stewards who will review television footage, telemetry from the cars and the drivers own accounts before handing out any penalty. It's another blot on Grosjean's copybook, the 26-year-old having already gained a reputation as a driver prone to making mistakes.