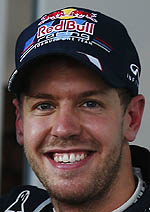 Sebastian Vettel was quickest the morning, and though he left it late before toppling Lewis Hamilton, who was the pace-setter for much of the morning, the German's quickest laps were astounding, almost 1.5s quicker than anything the Englishman could manage. More importantly, he was over 2s quicker than title rival Fernando Alonso.

The brand new track, combined with the cool temperatures this morning meant we saw more than our fair share of offs with a number of corners catching out even the best of them. Also, it was noted that a number of drivers are using the outside edge of the track, something that Charlie Whiting is sure to act on in due course.

The lights go green and Vergne is straight out to work, followed, shortly after, by Raikkonen, Kobayashi and Perez. Sadly, as in this morning's session, Bernie's wonderful live timing has failed.

Within moments there are 14 drivers on track, amongst them Alonso, as Ferrari pulls out all the stops in the battle with Vettel and Red Bull.

As Perez posts 43.418, the camera picks up a beautiful slo-mo slide from Senna at T18, the Brazilian discovering that the warmer conditions have done nothing to improve grip. Elsewhere, Alonso has a nasty twitch at T11.

It's that man again, Vettel, on his first flying lap, goes quickest, the German crossing the line at 40.790. Next time around he goes quickest in the first two sectors before diving into the pits.

Hamilton goes second (41.593), as we learn that Vettel was ordered back to the pits after his team became concerned at his water pressure. Hamilton ups the ante with a 40.744.

A 40.743 sees Webber to go quickest only to be leapfrogged, moments later, by Button (40.678). Rosberg is warned not to weave in front of other cars, the German reminded that Perez was fined for this in FP1.

As Rosberg goes second (40.723), engineers are looking at the rear of Vettel's car to see if there is a water leak. To add to their concern Alonso posts 40.431 to go quickest.

Lap after lap the times tumble, Rosberg goes quickest (39.842), ahead of Webber, Alonso and Hamilton. Meanwhile, after fifteen minutes, Massa and the HRT duo have yet to post a time. Indeed, the Spanish team hasn't turned a wheel in this session.

Massa finally gets to work, the Brazilian getting caught out at T19, one of many today, he subsequently posts 40.756 to go sixth. A couple of laps later he bangs in a 40.064 to go second.

Raikkonen runs wide at T8 while Maldonado does the same at T1, drivers continue to be caught out.

Thirty minutes in, the Caterham duo are first to switch to the options. Elsewhere, Grosjean complains that his rear is "all over the place".

Button goes quickest in S3 to close to within 0.024s of Rosberg, while Maldonado runs wide at T20. Elsewhere, Alonso is caught out (again) at the notorious T19. Nonetheless, the Spaniard improves to second with a 39.490, just moments after Webber had gone quickest with a 39.485.

Petrov (options) spins at T1 as Brendon Hartley reveals that he will be testing "a few things" on the Mercedes simulator in Brackley after this session.

On board with Vergne who is struggling for grip despite being on the softer rubber.

Grosjean loses a heap of time behind Karthikeyan in Turns 8/9, though the Frenchman is clearly frustrated there is nothing the HRT driver can do. There are a couple of places here where drivers are encountering this sort of problem and they must learn to deal with it.

In the Ferrari garage, Ron Howard, whose highly anticipated movie about the legendary 1976 season battle between Niki Lauda and James Hunt is out next Spring, talks to a couple of fellow guests.