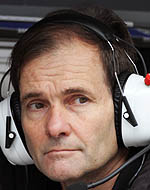 After two consecutive races in Japan and South Korea, the calendar offers a bit of respite and an opportunity to recharge batteries before another two weeks of continuous racing in Asia which gets underway with the Indian Grand Prix from the 26th to the 28th of October. It will be the second time that Formula 1 visits India, after a successful first edition in 2011 where Narain Karthikeyan made history by being the only local driver to take part in the first Indian Grand Prix. It will be a very special occasion once more for HRT Formula 1 Team and, in particular, for local hero Narain Karthikeyan, who will also be of great help to his teammate Pedro de la Rosa, who has never raced at the spectacular circuit.

The Buddh International Circuit is made up of two long straights and a variety of corners which are demanding for driver and car alike. The track goes up and down with downhill gradients of 8% and uphill ones of 10% and the track has a width of up to 20 metres in some areas that make for various overtaking opportunities.

Pedro de la Rosa: "Just like Korea this will be a new circuit for me and all I know of it is from the work I did on the simulator last year. From what I know it's an interesting circuit with a lot of medium and fast corners where we will have two DRS zones. It will be interesting to see how the asphalt has evolved from one year to another because last year it was brand new and quite dirty. I must admit that, overall, it's a circuit that I like the look of. We hope to have solved the reliability issues which we suffered in Korea and complete another good race here."

Narain Karthikeyan: "Obviously this is the most anticipated race on the calendar for me and there is already a great buzz around the event. The layout of the Buddh International Circuit is a great mix which makes it challenging for the tyres as there are very few conventional straight-forward corners but since the surface isn't abrasive at all, wear shouldn't be an issue. I've got great memories from last year's Grand Prix as I had a great weekend; the car was good and we were quick. I hope this year things go even better and I can dedicate it to the fans who are showing me so much support. I can't wait to get out on track!"

Luis Perez-Sala, Team Principal: "Personally I've never been to the Buddh International Circuit but I'm eager to see it because I've heard great things about it, being a very complete track. We're looking forward to it because of Narain, who will have all the fans backing him throughout the weekend. It's a very special Grand Prix for him and we hope to put in a good performance and for him to complete a good race like last year. Pedro has never driven there and will have to adapt first but he'll definitely lean on Narain's experience from last year. Our target is to have good reliability and finish the race with both cars and improve the performance from Korea to reach the level we were at in Japan."