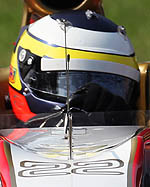 Yeongam hosted the Korean Grand Prix today; the sixteenth race of the season, which was a complicated event for HRT Formula 1 Team as, at this track, the difference to the team's main rivals was greater than expected. Narain Karthikeyan finished the race in 20th position whilst Pedro de la Rosa had to retire, with only 17 laps gone, because of a problem with the throttle pedal.

After this stint of races, the Formula 1 circus will take a short breather before returning to action in two weeks with the Indian Grand Prix held in Delhi from the 26th to the 28th of October.

Pedro de la Rosa: "We were anticipating a tough race but the start was good. Unfortunately, we had a problem with the throttle pedal since the fifth lap. At the start it would get slightly jammed but as the laps went by it got worse so the team decided to pull me out. I think they made the right decision because, not only was the car very difficult to handle and we were going slower and slower, but it was also dangerous. After this tough weekend we must now leave this behind, look ahead and think about the next race".

Narain Karthikeyan: "We opted to get the race underway on supersoft tyres and the start was good as I got past a few cars. But perhaps it wasn't the best option because we had quite a bit of graining in the front tyres from the start which made me struggle with some understeer. But when we changed to soft tyres the balance of the car was pretty good. I think a one-stop strategy was too much for the front tyres but we had to take the risk. It's been a tough weekend but I'll keep the positives which is to have finished the race after two races not doing so and the Indian Grand Prix which is on the horizon".

Luis Perez-Sala, Team Principal: "We knew it wouldn't be an easy race but we went for it. Narain, after his bad luck in qualifying yesterday, completed an impeccable race today whereas Pedro was the downside of the day. But there was no alternative because of safety reasons. After the Japanese Grand Prix where we took a step forward, this weekend we were unable to fight with our direct rivals. It's been tough but in two weeks we will have another opportunity to continue with the progress we'd shown up to now".