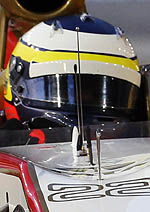 The Japanese Grand Prix which took place at the Suzuka circuit today got underway with a multiple accident which both Pedro de la Rosa, starting in 20th, and Narain Karthikeyan, 24th, were able to avoid without too many complications. Both drivers, who like the vast majority opted to start on soft tyres, maintained a competitive race pace although they were unable to hold on to their starting positions. Pedro de la Rosa encountered a problem in his first pitstop and lost some valuable time. However he maintained his focus and ran in similar times to his rivals from Caterham and Marussia until the end to finish in eighteenth. This result allows the team to draw positive conclusions with regards to the new floor, which notably improved the performance of the F112. Narain Karthikeyan was also competitive but the team took the decision to bring him in from the race on lap 34 for safety reasons, as there was a problem with the bottom part of the car which could present risks.

Pedro de la Rosa: "Today's race was quite good and we could say we've taken a step forward, although we still have plenty to do. The first stint was good but we had a problem in the first pitstop which made me lose quite a lot of time. My times with the hard tyres towards the end were very good and we were right in there. The car was handling well and we got close to Pic and Petrov, which for us, at a track like this, is fantastic."

Narain Karthikeyan: "I had a good start and passed Pic on the first lap. The car was working well, it had good pace, and after the first pitstop I was ahead of Pedro and completing a good race. However, we suffered a problem with the car later and, coming in for a second tyre change, the team decided that, as a precautionary measure, it was best to stop. Now it's time to think about Korea and work to take another step forward."

Luis Perez-Sala, Team Principal: "As it tends to be the case in races like this, I'm happy on one hand because we were competitive; we finished one lap off the winner which indicates that our pace was good. But on the other hand it was a shame that Narain had to retire. He made a good start and was running well but the car suffered a small issue with the bottom part and, for safety reasons, we had to stop him. Now we will see how big the problem is. But overall, it was a positive weekend because we progressed, conserved our tyres better and improved our times. We hope for this progress to continue."