Massa: concentrating on the job in hand 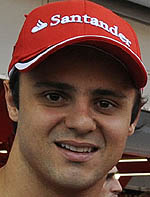 While speculation over his future with Ferrari continues, Felipe Massa refuses to dwell on the situation, at least publicly, preferring to concentrate on the forthcoming Japanese Grand Prix and aiding his team in its championship fight(s).

"Of course my future is important, but right now it's the results that are the most important thing," he told the team's website, "which means I have to concentrate on each race as it comes.

"I know what I can do," he continued, "what I can give to the team and what are my talents. The team also knows this, because I've been here with them for rather longer than a day or even a year! The best plan is to race without worrying about the future."

In 2006, he finished second to Fernando Alonso, though the Spaniard was driving for Renault at that time. Could we possibly see history repeating itself this weekend?

"It would be fantastic of course," said the Brazilian, "and also very good for our situation in both championships. Even if it will be tough, this weekend, I would love to be fighting for pole and victory again. Our car can be competitive at Suzuka, because there are plenty of high speed corners which suits the F2012, as can be seen from the fact we were competitive in Silverstone back in the summer and these two tracks have some characteristics in common, in terms of the required levels of downforce and how you set-up the car. In fact, I hope we can be more competitive at all the remaining tracks, as every race now is very important for the team and for Fernando and also for me of course! We all know that we need to work hard in order to be as competitive as possible at every track.

"Suzuka is a very difficult and complex track, where a driver can make the difference, showing plenty of aggression through the high speed corners, so to be the fastest man in qualifying there is definitely a good feeling," he continued. "It was a nice race too, although I had to stop much earlier than planned because of tyre problems, which meant I lost a position and the win to Alonso, who was with another team then. At that point, Michael (Schumacher) was in the running for the title, but his engine failed, which cost him the championship that year. All the same, it was a great race, starting from pole and finishing second after having an exciting fight with the winner."

Widely acknowledged as not having the best car on the 2012 grid, while the results, especially Fernando's championship lead, are more about the Spaniard, Massa insists that the team is working flat-out.

"The car changed a lot since the mid-season test in Mugello and we have developed it all the time since then," he said. "We have tested constantly, nearly always bringing new parts to the track at each race. The job is all about scoring one more point than the others when it comes to the final race and so I hope we can improve it even more for the remaining races than we have done so far."

Looking ahead specifically to Suzuka, the Brazilian said: "The preparation is more or less similar to the other races, although having said that, it's true that Suzuka is quite a demanding circuit to drive from the physical point of view. "The fact that it has many high speed corners means you use a lot of muscular strength through the turns. So although physical preparation is more or less the same, with concentration on working the heart through aerobic exercise, we will do more work than usual on neck muscles for example, in the build up to Japan, to deal with the high G-forces. In general, in this final part of the season, you also have to prepare yourself for the fact there's a lot more travelling involved: the Suzuka circuit is not the most accessible and, wherever you fly to, you then have quite a long journey to actually get to the circuit. And let's not forget that, immediately after this race, we have to head off to Korea. It's also important to get to Japan as early as possible, because it also takes a while to get used to the time difference.