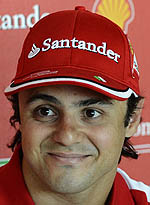 Two strong showings from Felipe Massa have left the Brazilian confident of a similar performance this weekend. The eleven-time winner has been at the centre of attention throughout the season as speculation over his future with Ferrari intensifies.

The Brazilian however, remains defiant: "I think we need to carry on doing a good result, trying to do our best in the car, trying to put everything together," he argued in Singapore. "That's what I'm always trying to do and I think this is the most important part for me, not to worry that my contract is not signed yet, but I'm really looking forward to that."

Many of Massa's perceived problems have come because teammate Fernando Alonso has enjoyed a rich vein of form, carrying a car many believe to be well off the pace at the start of the season to the top of the championship standings. While some have called for Massa's head, others have suggested his performances are simply indicative of Ferrari's true pace, his recent upturn in performance evidence of that.

Whether that proves enough to keep him at Ferrari remains to be seen, the 31-year-old focussing only on the job in hand.