Alonso confident of success in Singapore 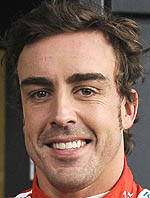 Fernando Alonso is looking to extend his championship advantage this weekend as the Formula One circus moves on to Singapore. The most successful driver around the streets of Marina Bay, Alonso is focussed on securing a strong qualifying performance before racing to his third Singapore Grand Prix win.

"We've been competitive in Monaco and competitive in Canada, which is a kind of street circuit, so we will try to do our best here again," he told reporters. "We know how important pole position is so Saturday's an important day."

With four podiums - two of which were wins - at the circuit Alonso has developed a reputation as something of a Singapore expert, a point he played down when asked. "I think I've been lucky with the cars I drove," he shrugged. "It's a challenging track. There's no room for mistakes so it's like Monaco in that aspect.

"On some tracks you find your limits, and if you touch the grass one lap in free practice or quali or whatever you just lose the lap. Here you lose the session."

Ferrari will face stern competition from Red Bull and McLaren, the latter coming off the back of three race wins in a row. Specifically Alonso is weary of the threat posed by Lewis Hamilton, who has emerged as the strongest championship contender in recent races.

"We always said, from February, that Lewis is probably the one that I respect more because I know what he can do with good cars and bad cars," the Spaniard admitted. The challenge however is not simply that of Hamilton; Sebastian Vettel, Mark Webber and Kimi Raikkonen are also within striking distance. Even Jenson Button is in with a chance of the championship.

"There are still five or six drivers who can fight for the title," he claimed. "In any part of the race we cannot cover, in terms of the strategy, five drivers. "In that case we need to cover whichever is the closest one and after a few races that McLaren's won (Hamilton's) again the favourite for this one."

The team has a number of updates which it hopes will allow it to end McLaren's run of victories and hand Alonso another podium on the streets of Marina Bay. It would be fitting if he could take to the dais in Singapore, where he is the sport's most successful driver, as it would take his career podium total above that of Ayrton Senna.

Third place in Monza saw the 190-race veteran equal the late Brazilian's total of 80 podium places, a feat the Spaniard is justifiably proud of.
"Numbers are always important when you retire, when you're racing you don't pay too much attention but when you equal some numbers of Ayrton Senna, especially for me, it's quite a big thing.

"Hopefully I can reach some more important numbers to equal Senna…" he added with a grin.

The most successful driver around the streets of Marina Bay, Fernando Alonso is focussed on securing a strong qualifying performance before racing to his third Singapore Grand Prix win.