Another blow to French F1 hopes 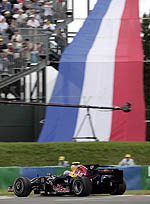 Hopes of F1 returning to France have taken a turn for the worse after the government ruled out financial assistance.

Dropped from the calendar in 2009, the country which gave us Grand Prix racing has sought a number of different avenues in its attempts to return to the schedule.

However, in the wake of the Sports Ministry confirming that state aid will not be made available, the French Autosport Federation (FFSA) is seeking to discover whether two possible bidders for the Grand Prix rights, Magny Cours and Le Castellet, will proceed.

"Madam minister (Valerie Fourneyron) confirmed that the state would not grant any financial help to the French Grand Prix," said the FFSA in a statement on its website.

"I will put a question to the two bidders in the coming days to contemplate with them the conditions in which they could carry on with their candidacies," said FFSA president Nicolas Deschaux.