Why Michael Schumacher may be F1's most valuable driver 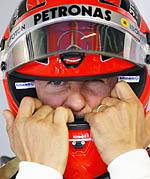 There is no doubting that Michael Schumacher's stock is not at its highest right now. One of the German's lowest points came just last weekend when he was handed a 10-place penalty for crashing into Toro Rosso's Jean-Eric Vergne during the Singapore Grand Prix. To cap it all, for months he has been at the centre of rumours suggesting that he is yet again on his way out of F1. However, a glimpse into Schumacher's real value came the week before the race and it didn't just show how valuable he is to the team but to F1 itself.

The revelation came at the first annual Zoom auction of signed photos taken by F1's drivers and team bosses. Classic car specialists Coys were in charge of the auction which took place in the Wyndham hotel in Chelsea on 14 September and was hosted by former team boss Eddie Jordan. He got the 200-strong crowd going with a stirring tribute to the late Sid Watkins and the incredible work done by Great Ormond Street Hospital which the auction was in aid of.

Pitpass was represented at the event by its editor Chris Balfe and business editor Christian Sylt, whose Formula Money firm arranged the event with Influence, the marketing firm run by Watkins' son Alistair and former Ford communications boss Stuart Dyble.

As the photos from the event reveal, there was a strong contingent from F1 there along with Jordan including Damon Hill, James Hunt's brother David, photographer Keith Sutton, FOTA's secretary general Oliver Weingarten, Red Bull Racing's head of brand Anthony Ward and representatives of some of the wealthiest team owners in the sport. In addition, there were wealthy collector types and flying the flag for celebrity F1 fans were former England footballer Ledley King and Dragon's Den star Duncan Bannatyne. Sky was there and filmed the event for a highlights package which will be broadcast on Friday during its 8pm F1 Show. However, the really interesting part wasn't the champagne and smooching but the bidding itself.

Half of the total of 50 photos were in the live event with the remainder going in an online auction which only has a few days left to run. Just like those in the live event, all the photos in the online auction are signed and all the proceeds go to Great Ormond Street. The photos available online tend to be taken by the drivers who have strong fan bases in countries far from the UK as they are least likely to have been able to attend the live event. The photos sold live were taken by most of the British drivers as well as globally well-known names such as Sebastian Vettel, Mark Webber, Fernando Alonso, Bernie Ecclestone and Schumacher. The pattern of bidding told an interesting story.

The photos each sold for around £450 on average which is mighty impressive given that amongst this group were also signed snaps taken by less well-known names such as Toro Rosso team boss Franz Tost and his counterpart at Marussia John Booth. It is even more surprising given that signed photos of top drivers such as Alonso and Webber typically go for nearly five times less. This alone shows the premium you pay for buying a unique photo taken by the person who signed it.

Some of the photos however were sold for much more than the others and there was an entertaining bidding war between Hill, Sutton and marketing boss Xander Heijnen for a photo of two snowmen taken by Ecclestone. In the end Hill was the lucky recipient of the photo when the hammer fell at a price of £1,100. It's a sizeable sum but still less than half that of the one which made the most money. This is where Schumacher's star power really showed through.

Schumacher's driver's eye view from the seat of his Mercedes in the pits went for a whopping £2,500 with several guests in the room being driven up by a phone bidder from California who eventually got the photo. It is hardly the most innovative of photos but the fact that it sold for far more than any of the others is undoubtedly testimony to Schumacher's worldwide appeal. For the sake of comparison, a Schumacher autograph goes for around £299 meaning that his photo sold for around eight times its value instead of the four times which was raised by the snaps taken by many of his rivals.

Given that this seems to suggest Schumacher's recognition and appeal may well exceed that of the other drivers one wonders whether F1 should not be urging the former champ to retire again but instead be doing all it can to keep him in the sport. Or is it perhaps the case that Schumacher has become so synonymous with F1 that even if he is not racing the man on the street will think he is still involved? It may sound laughable but there is some evidence for it as studies have shown that in unprompted surveys many people still associate F1 with tobacco brands which left the sport long ago.

One thing we can safely say is that Schumacher has star appeal in the United States and the buyer in California isn't the only evidence for that. A few years ago in a memorabilia shop in Florida packed with signed items by the most famous sporting names in the US. The most expensive item happened to be a Ferrari book signed by Schumacher and his former team-mate Rubens Barrichello which was being sold for £2,350 ($3,800).

With the US Grand Prix returning in two months after a five year absence Schumacher could be just what F1 needs to build its own recognition in the US. Unless it wants to shoot itself in the foot, the last thing the sport would seem to need is Schumacher announcing his retirement. So forget all the talk of why McLaren needs to offer Lewis Hamilton enough to stay with the team, it is surely Mercedes which should be ensuring that Schumacher stays because he may not just be the biggest asset of the team but of F1 itself.

Check out the entire collection of pictures in the Zoom gallery, here.