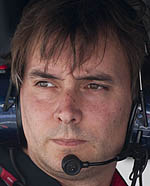 After being recently appointed as Technical Director at Toro Rosso, James Key has spent his first weeks understanding the team, and is pleased with what he's seen.

"One of the big strengths I noticed very quickly is the enthusiasm everyone has, and the ambition to make it succeed," he said. "It's a very good atmosphere to work in, something a little bit familiar to me in a way, there's a bit of a family atmosphere because it's a small team that's grown very rapidly."

That rapid expansion has caused cracks however, according to Key, who will now work to consolidate his new team. "There's still separate departments doing a very good job but that needs to come together - and everyone recognises that," he explained. "It's a case of going through that process.

"There's no lack of effort from everyone, it just needs to be given direction."

Joining the team late in the season, Key has been reassured by some of the decisions made on the 2013 car, which he says is about 60 percent complete. "There's certainly some work to do on the aero side, which is very clear and mechanical, for that matter, from a technical point of view. There's some pretty clear steps.

"Obviously time is short, and this is a time when you've really got to prioritise," he added when asked about his influence on next year's car. "For next year the architecture and a lot of the suspension geometry was already defined before I arrived, so it's a case of picking up what I can, together with the guys in Faenza and at our wind tunnel in Bicester from this point forward.

"But I have to say a lot of very sensible decisions have already been made for next year's car, exactly what I would have done. Which is good. So, we're all aligned in our direction and we'll do everything we can between now and Melbourne."

Key's arrival has been well received by the drivers, who appeared to lack the technical leadership they needed since Giorgio Ascanelli left the team after the British Grand Prix. In Monza Key spent time getting to know the team, leaving a positive impression on Daniel Ricciardo.

"His first weekend in Monza worked well," Ricciardo said. "From Friday through to Sunday we improved each day, and that was positive.

"He didn't really know us so it's natural to take a bit of time to get used to everyone, to get a bit of confidence with the people around you," he continued. "I haven't been in Italy - well, I have for an aero test but not at the factory - so I'm not sure how it's all going in there but to be honest I've heard good things."

Key joined Toro Rosso after serving his gardening leave, having left the Sauber team in the build-up to the 2012 season. He started his Formula One career as a data engineer at Jordan in 1998, staying with the team until 2010 when he left to become Technical Director at Sauber.