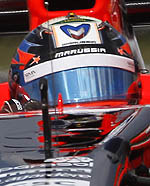 The Marussia F1 Team drivers, along with the rest of the field, enjoyed a much more fruitful day of preparation today in the countdown to Sunday's Belgian Grand Prix. Conditions were bright and sunny all day, which meant that this morning's FP3 session took on a slightly frenzied pace, as the teams sought to cram in the work for all three practice sessions after Friday's wash-out.

Timo and Charles made good progress in preparation for qualifying, demonstrating an impressive uplift in pace versus the team's immediate competitors and also relative to the front of the field. The latest round of developments have clearly yielded a good step. Unfortunately, they had a more challenging time of it in qualifying when Timo was less happy with his car towards the end of the lap and traffic compromised Charles' shot at his second flying lap. All hopes rest on tomorrow's 44 lap race to demonstrate more of the benefit of the new components.

Timo Glock: "After a difficult Friday for everyone, which meant we didn't get any dry running, it was quite a jam-packed Saturday. FP3 this morning was my first opportunity to get a feeling for the updates and, as important, for the little change we made to correct the rear end instability problem I've had in the last couple of races. The team put a lot of work into that, so I want to thank them as I think we have improved the situation, although we have to see what transpires during the race. Qualy was okay; the first run was not great, but I could feel that I could maybe gain a bit more time because I made some mistakes in the first lap. In the second lap I lost quite a bit of time down the straight, due to the wind I guess. Things picked up from there and I was able to keep pushing from corner to corner, but then towards the end of the lap for some reason I lost the rear end again on turn in and lost some time, so we'll have to look into that. It's a real shame as we were looking good versus the next team today, but let's hope we can get it back in the race tomorrow."

Charles Pic: "I think we have made a very good step forward with our latest updates, but I am disappointed with how things went for me in qualifying. The first run was okay, but we had some room for improvement, then on the second run we had only one flying lap to play with and we hit traffic in sector 2, so I lost a lot of time there. Versus the competition, we had been looking very strong, so it is a little frustrating. Now we have to focus on the race and what we can do then to show what we have gained with the new developments."

John Booth, Team Principal: "Despite a challenging start to the weekend due to Friday's weather, we have plenty to feel positive about this weekend. Due to the lack of running, it was obvious from FP3 onwards that we hadn't quite struck the correct balance between qualifying and race set-up and there were some obvious deficiencies that would hurt our pace in qualifying. That said, the flip side of this is that these areas will actually be a positive for the race, on top of the normal pace improvement that we typically see on Sunday. Both drivers did a good job, but traffic cost Charles, and we have not made life easy for ourselves for tomorrow. I have no doubt that when it comes to the race we'll be stronger again, as we have shown that we have made another step in terms of our overall pace. The updates are clearly an improvement, so although we've had a challenging start to the weekend, we need to extract the maximum from them tomorrow."