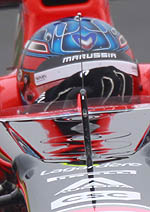 As Marussia prepares for its 50th Grand Prix, technical consultant Pat Symonds reflects on the story so far and what we might expect in the future, revealing that in addition to using Williams KERS system, the team will stick with Cosworth in 2013.

Talk us through the highlights of the 2012 season so far from the Marussia F1 Team point of view.
I think our season has been one of continual improvement. We can certainly say that the start of the season was very difficult for us and from that we have experienced a lot of new heights - getting our wind tunnel programme working, delivering performance to the car in a cost-effective way, improving our procedures. It is important to remember that we're a very new team, and therefore there is an awful lot to be addressed. But I think rather than a single highlight there is just a continual improvement - a slow march forward towards the leaders and our direct competitors. Those are the things that give us some confidence in where we are heading.

What about the season generally? One of the best ever perhaps?
I think in terms of the racing, the unpredictability we've seen this year has certainly provided an exciting season for the spectators. We're 11 races down out of 20, and it is still difficult to say who is going to emerge at the end of the year as world champion. That's a very unusual situation, and one that I think both the casual spectator and hardened fan are enjoying in equal measure. So yes, I think it has been an extremely good season so far.

Are there any areas where the team has fallen short of expectation?
I don't think so. We're very realistic and therefore our expectations, while ambitious, are not set beyond what we feel we can achieve if we stretch ourselves. That said, our performance on the faster circuits has been a little bit disappointing. Our focus has been on trying to improve the performance of the car on the higher downforce circuits and our limited resources have not allowed us to do everything we wished to do. But we have no particular regrets at this stage.

The latest upgrade was described as the Marussia F1 Team's 'first proper wind-tunnel generated upgrade of the season'. Tell us about the significance of that?
The wind tunnel programme commenced at the end of last year. It takes quite a long while to build the very sophisticated models that we use in a Formula One wind tunnel, and therefore the influence of that programme was not really felt in the first iterations of the MR01. As we progressed through the early part of the season, we were able to bring relatively small upgrades to the car as a result of the wind tunnel programme, but our first major upgrade was the one we introduced at Silverstone. Just to give some examples of that, we had a new nose, which had a preliminary release from aerodynamics towards the end of May, having been in the tunnel in the third week of May. The sidepods and the exhaust were developed at a similar time. The rear wing, which was totally new, began even earlier and we saw the preliminary aero release of that towards the end of April, the May wind tunnel session providing the opportunity to tune that. So really, by the end of May, we'd defined our Silverstone upgrade and we spent June on the detailed design and manufacturing the hardware that we needed for the race at Silverstone.

Has the upgrade delivered everything you had hoped?
Yes, it certainly has. We're very pleased with the correlation we're seeing from the wind tunnel. We're using the McLaren Applied Technologies wind tunnel as part of our technical partnership and, generally speaking, I think our predictions from that are being seen on the circuit, both in the measurements that we take on the Friday during free practice and indeed in the improved performance that we are seeing on the car.

What additional upgrades do you plan to bring to the car during the balance of the season?
We still have a number of upgrades that we can bring to the car this season. We are fortunate in a way that the 2013 aerodynamics regulations are quite similar to the 2012 regulations and therefore components that we are developing now can be common to the end of this season and indeed the start of next season on the 2013 car. So while certainly our focus now is on 2013, we have improvements for Spa and more coming for Singapore and indeed I'm sure that won't be the end of our developments.

How is the 2012 driver line-up working out? Timo and Charles have proved to be a strong pairing.
I think they are. There's a good blend there of youth and experience. I think we're very lucky as a young team to have a driver with the experience Timo has. He certainly helps guide us in our development as well as really getting the most out of the car on every occasion. So I think that our driver pairing is everything we could have hoped for.

Charles (pictured) seems to be relishing his debut season so far. Have you been pleasantly surprised by his performance?
Yes, absolutely. Charles is only 22 years old. He's had a couple of years in GP2 and a fourth place in that series last year, but some very impressive showings in Formula Renault 3.5 as well. I think this year he has matured in his approach in Formula 1. There is no doubt that he's fast; he has proven that on a number of occasions, and I think race by race he learns more about the nuances of the tyres in Formula 1 and indeed the way one approaches a Grand Prix weekend.