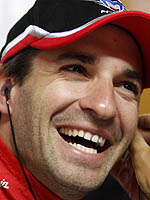 Marussia driver Timo Glock is hoping for greater consistency in the second half of the year as the team looks to chase down the coveted tenth place in the Constructors' Championship.

With no pre-season testing the team entered the Australian Grand Prix with just a handful of laps under its belt and since then has failed to build on last season.

An update introduced for the British Grand Prix netted some results, but with mixed conditions in each of the Grands Prix weekends since that update has been difficult to quantify.

"It looked good at Silverstone," said Glock. "For me it looked typically bad in Hockenheim but that was not related to the update because Charles had quite a good pace." The former Toyota driver struggled throughout the German Grand Prix, qualifying behind his less experienced teammate before being beaten by Pedro de la Rosa's HRT.

"It's definitely not the tyres," he explained when asked if the problems were related to getting the best out of the Pirellis. "Okay you need to switch them on but for us it's just inconsistency in the car which we had in the last couple of races and that's the difficult area where we have to get on top of it."

It led to a number of changes being made in the build-up to the Hungarian Grand Prix. "We tried to find out where the problem is and changed a lot of parts and the car felt better again," he said. "We need to get rid of all these up and downs we have at the moment and get more consistency in the car."