Fry: There is still a lot of work to do 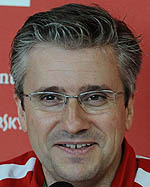 As Ferrari begins its mandatory shutdown, technical director Pat Fry looks back at the first half of the season while admitting that he intends to make the best of his own free time.

"Obviously, at the start, after the winter tests, we were a bit behind," he admitted to the Scuderia Ferrari Racing News. "I think we learned a lot in this period and used that later on. We struggled in the early races: I remember that in Melbourne we were around a second and a half behind the best. We then put in a huge effort, in the wind tunnel, the production department and at the design stages. The entire workforce reacted to the challenge we faced. In my opinion, we have overtaken a large part of the other teams in terms of development over the season: we staged a good recovery, but there is still a long way to go."

In Hungary, world championship leader Fernando Alonso talked of a slight lack of development in the recent races when asked about the Spaniard's comment Fry said: "It's true we had a handful of parts that did not work the way we had expected: there's always a chance that can happen in work like this. The positive aspect is that we understood the problem and everything is alright now: that way, we can use this experience to move forward rather than being left confused about it. In fact, we have a clear idea on the direction we need to take and we have already begun to work in this direction."

"When one tries to get to the limit, one definitely encounters new problems," he continued. "Now we have a good understanding of the situation, therefore we only need to modify our development criteria and continue to push."

With no races until next month, Fry was asked what the team will be doing over the coming weeks. "We were all here this week," he replied, "and we tried to do as much as possible. We have developed a few small parts for Spa in the wind tunnel, while also concentrating on other updates for Singapore. This has been a very tiring week, but now we have two weeks holiday and that will certainly see us come back revived. Then we will be back, giving it our all immediately after the break."

As for the Englishman's personal plans, he admits: "I will go home to England to spend some time with my family. It will be nice to have more than two days in a row to spend with my two children.

"The last four, five months have been very tough for all of us in the Scuderia. So I think it's right that we have a break so everyone can recover and then we will have to come back pushing as hard as we have been doing all the way to the end of the season."

Looking ahead to the back-to-back races at Spa and Monza, Fry reveals: "We have a few interesting developments that we will introduce at Spa, a track which, from an aerodynamic downforce point of view, is quite special, as indeed is Monza. In fact, we will also have an aerodynamic and engine package specifically suited to the Italian track. Therefore a lot of work has been done, but there is still also a lot to do: we must continue to keep up the pressure to a high level."