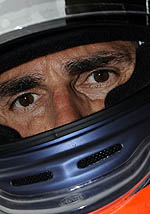 Just like yesterday, the rain didn't make its appearance over the Hungaroring in the end and the eleventh race of the season took place in extremely hot and humid conditions. The 69 laps really challenged the resistance of the drivers and the cars, but also the engineers and their strategies because, until today, they were unable to see the real duration of the tyres. Pedro de la Rosa and Narain Karthikeyan started with different two-stop strategies, with the Spanish driver beginning on medium tyres and the Indian driver doing so on softs. The race was a battle between both F112's and Timo Glock which finally went the German's way, but De la Rosa was very close to achieving the feat of finishing ahead of the Marussia once again. Narain Karthikeyan, on his behalf, suffered a problem with his front left suspension and was forced to retire with only 5 laps to go.

The team now returns to Madrid to work for a couple of days at the Caja Magica headquarters before jetting off on holiday during the obligatory factory shutdown. A well deserved rest after an intense but gratifying first half of the season which has seen the birth and first steps of the renewed HRT Formula 1 Team.

Pedro de la Rosa: "It was a tough but nice race. It was very hot but we had a good pace. We went for a two-stop strategy, starting on mediums, then mediums again and finishing off on softs. At the end I had Glock in my sights and he was blocking his tyres a lot, but the race finished before I could overtake him. The blue flags didn't help much either and this time I was unable to pull it off. Overall, I'm happy but it was a survival race. For the second half of the season we've got a few upgrades planned which we hope can help us take that step forwards that we need to be ahead of Marussia. Now we have to rest a few days to return with our batteries recharged."

Narain Karthikeyan: "I had a good start to the race, maintaining Pedro's pace and running ahead of Glock after his spin. But after the first pitstop he was running very strong on softs, I was on mediums, and he overtook me. It was also very complicated to manage the blue flags, especially because there were so many of them. With five laps to go, the car was steering to the right, it was getting worse, and coming out of turn 3 the steering broke, so we have to figure out what happened exactly. It was a tough race, but we must continue working to improve when we return from the summer break."

Luis Perez-Sala, Team Principal: "It was an interesting race for us because we fought one-on-one with Glock from start to finish. Pedro and Narain got ahead of him and stayed in front until halfway through the race, but they overtook us in the second pitstop. Pedro had him in his sights towards the end but this time it wasn't to be. Although we finished behind our rivals, we kept a good pace and the most negative aspect is the problem Narain suffered with his suspension, which we now must analyze. Now we return to Madrid, to the Caja Magica, and after a few more days of work we will take a couple of days off to head into the second half of the season full of energy to continue progressing and improving this project."