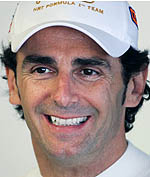 Having just surpassed the midway point of the season, the Hungarian Grand Prix got underway today with the first two free practice sessions. In FP1, Dani Clos lined up, once again, alongside Pedro de la Rosa and both drivers were able to complete the morning programme trouble-free. Clos perfectly fulfilled his role as a test driver and gave way to Narain Karthikeyan for FP2. This session started in dry conditions but was interrupted with just over half an hour to go because of an intense summer storm. Before the rain appeared, Pedro de la Rosa was able to test both the medium and soft compounds whilst his teammate Narain Karthikeyan preferred to focus on the mediums.

Just as the team expected, the F112 seems to adapt well to the Hungaroring and it is also a track that the drivers like, which reflected in the small differences in today's times. The forecast suggests that it shouldn't rain tomorrow at the Hungarian circuit but the situation isn't so clear for Sunday's race, so tomorrow the team will have to work hard to be prepared for any occurrence.

Pedro de la Rosa: "In general today went quite well. Despite the fact that we were unable to do long runs with a full tank to see how the tyres reacted, we did at least have the opportunity to test both compounds at the start of the second session and we got ahead of the rain. The car has performed well from the very start but we still have to improve it a bit for tomorrow, especially make it quicker on slow corners because it's oversteering. But we have a clear indication and a good base so all we have to do now is work."

Narain Karthikeyan: "The Hungaroring is virtually a new track for me because it's been seven years since I raced here, so I would have liked to have done more miles in the dry, but the rain caught us all by surprise. The track is pretty bumpy and quite technical so it's quite tough to get used to, but I think we've done a good job. We're not far off our main rivals and I think that tomorrow we can take them on."

Dani Clos: "Today I was finally able to enjoy a dry session in good conditions. Towards the end of the session we were running very well on used tyres and I feel better every day in the F112. Just like any Friday session the objective was to have a first contact with the circuit and start to improve the set-up. I still need to do more miles to continue progressing but today I took another step."

Luis Perez-Sala, Team Principal: "We did a good job in the first session with Pedro and Dani, who is more comfortable in the car every time. Both of them completed their work with no issues. With the heat from this morning we couldn't imagine that it would rain in FP2 and we would have liked to have done more laps with Narain since he hadn't run here for a while. But despite this he set good times and at the end the track was in tricky conditions so we didn't risk it. We're being consistent and tomorrow we will try to continue in this line."